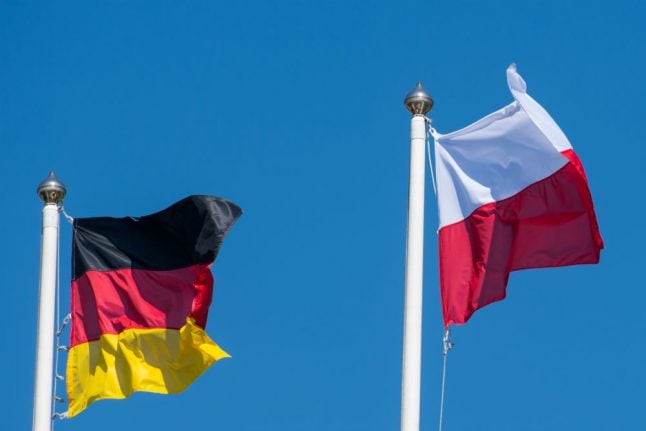 The flag of Germany and the flag of Poland. Photo: DPA.

Nazi Germany attacked Poland on September 1, 1939, marking the beginning of the Second World War, which did not end in Europe until May 8, 1945.

More than six million Poles died during the war, or over one in five citizens. Nearly half of them were Jewish, according to a government analysis published in 1947.

Sixty-five percent of Poland's factories, two-thirds of all bridges, 84 percent of rail infrastructure and 30 percent of homes were destroyed, according to the document.

More than 40 percent of the country's cultural property such as paintings, sculpture and books was destroyed or stolen. Eighty-four percent of central Warsaw was demolished.

At the war's end, Poland lost almost half of its eastern territory to the Soviet Union and gained a smaller chunk of land to its west that had belonged to Germany. More than five million Germans were chased out.

Poland then remained under Soviet control from 1945 to 1989.

In 1945, the Allies decided that Germany would be required to pay $20 billion in reparations to the victim countries.

Half of it was destined for the USSR, which appropriated things like cultural property, buildings and factory goods in the German area under its control as payment. The USSR was then required to give 15 percent of the total sum to Poland.

After Germany split into two states, the German Democratic Republic in the east recognized in 1950 the new German-Polish border along the rivers Oder and Neisse.

On August 22, 1953, the USSR relinquished its reparations to the German Democratic Republic. Poland followed suit the next day.

Some experts have noted that these declarations were not confirmed by any
document.

According to the German government, this decision was confirmed by a senior Polish diplomat before the signing of a bilateral treaty in 1970.

On November 14, 1990, Poland and a united Germany signed a border agreement after the Two Plus Four conference on the reunification of Germany, followed by a good neighbour agreement in 1991.

The question of reparations was never raised, leading Berlin to assume a tacit agreement that the matter had been settled since 1953.

In 2017, the governing nationalist conservatives in Poland relaunched the debate on war reparations, believing the 1953 decision to be invalid because it was dictated by Moscow.