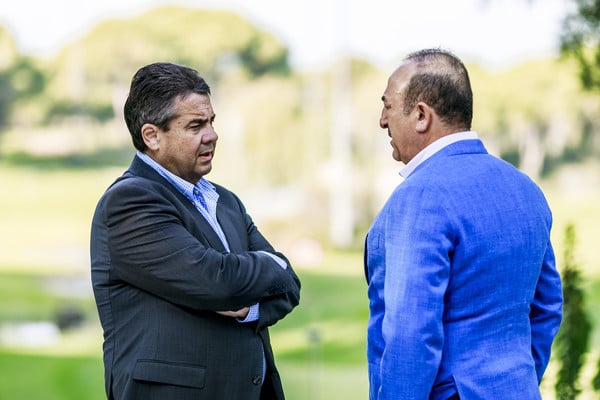 Mevlut Cavusoglu and Sigmar Gabrielmet in Antalya on Saturday. Photo: DPA
Turkish Foreign Minister Mevlut Cavusoglu hosted German counterpart Sigmar Gabriel for the informal talks in Antalya, both sides said in statements on Twitter.
Berlin has been outraged by the detention of German nationals under Turkey's state of emergency imposed after last year's failed coup, while Ankara has accused Germany of meddling in its affairs.
The meeting is the first between the two diplomats since tensions reached a new peak in the run-up to the German elections on September 24th.
“I met my colleague @sigmargabriel in Antalya informally to discuss bilateral relations; including the difficult issues and mutual expectations,” Cavusoglu wrote on Twitter.

I met my colleague @sigmargabriel in Antalya informally to discuss bilateral relations; including the difficult issues & mutual expectations pic.twitter.com/mD87usoBTp

…including the difficult issues and expectations from both sides. 2/2 https://t.co/Azy2mnw9po

The meeting comes just over a week after German activist Peter Steudtner was released following his arrest along with members of Amnesty International in July on disputed terror charges. Another German citizen, who was not identified, was also released in a separate case but cannot leave the country, the German foreign ministry said on Friday.
But nine Germans still remain behind bars in Turkey including most prominently Die Welt daily correspondent Deniz Yucel, who was arrested in February, and German journalist Mesale Tolu.
Gabriel had last month thanked former German chancellor Gerhard Schroeder, who retains warm personal ties with Turkish President Recep Tayyip Erdogan, for helping broker the releases. But Ankara denied any such deal.
The tensions have risen into one of the worst ever crises between Turkey and Germany, which is home to a large Turkish minority. Berlin has repeatedly expressed scepticism about the future of Turkey's EU membership bid.
German Chancellor Angela Merkel has urged a cut in EU funding linked to Turkey's membership talks to signal the bloc's unhappiness over the crackdown in the wake of the failed July 2016 coup.