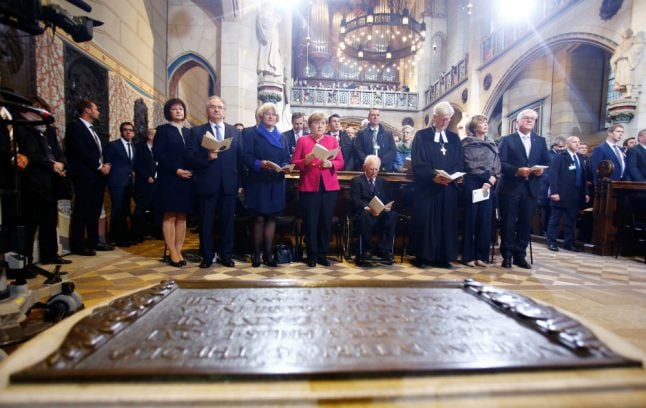 Chancellor Angela Merkel and President Frank-Walter Steinmeier arrived for a service at the church where German theologian Martin Luther is said to have first displayed his list of criticisms of the Catholic Church in 1517.

Legend has it Luther nailed his “95 theses” to the church door in a brazen challenge to the powerful institution, creating shock waves that eventually changed the face of Christianity.

The Reformation caused major upheaval in Europe, leading to wars, persecutions and exoduses, including the departure of the pilgrims for what was later to become America.

The deadliest of Europe's religious conflicts was the Thirty Years' War which ended in 1648 and after which religion's role in European politics was reduced.

The Vatican and Lutheran World Federation released a rare joint statement on the anniversary Tuesday, saying they “begged forgiveness for our failures and for the ways in which Christians have wounded the Body of the Lord and offended each other during the five hundred years since the beginning of the Reformation until today.

“We recognise that while the past cannot be changed, its influence upon us today can be transformed to become a stimulus for growing communion, and a sign of hope for the world to overcome division and fragmentation,” they said.

Merkel, herself the daughter of a Protestant pastor, said during a speech at Wittenberg's City Hall that “Luther had spurred a movement that nothing can stop.”

“He laid the groundwork for a new understanding of Man and the eventual development of modern democracy,” she said, while evoking the church's “crucial role” in society – Germany is one of several countries that do not have a strict official separation between church and state.

The service at the gothic Schlosskirche (All Saints' Church) in Wittenberg in eastern Germany marks the end of year-long celebrations by protestants in 700 German towns and cities.

Ahead of the service, celebrants crowded the street leading to the 16th-century house of worship, which houses Luther's tomb.

In Germany, “Reformation Day” is already a public holiday in several states, but this year the occasion was marked across the country.

He said Christians could not buy or earn their way into heaven but only entered by the grace of God, and his challenge had widespread ramifications, including the establishment of the Church of England in Britain in 1534.

However, the theologian's name has also been associated with one of Germany's darkest periods: his attacks on Judaism in his writings were used as a reference for Nazi ideology.

Merkel had said it was essential that Luther's anti-Semitism never be scrubbed from his theological legacy.

“That is, for me, the comprehensive historical reckoning that we need,” she said in her weekly video podcast on Saturday.

There are many theological differences between Protestants and Roman Catholics, including whether or not the Bible is the highest authority in matters of faith and whether the pope has full power over the Church.

In the joint statement, both parties committed to “overcome remaining differences between us”, adding that it was “clear that what we have in common is far more than that which still divides us”.

The precise number of Protestants is difficult to establish, given the number of Churches and offshoots, but the independent Pew Research Center estimates there were more than 800 million in 2011.