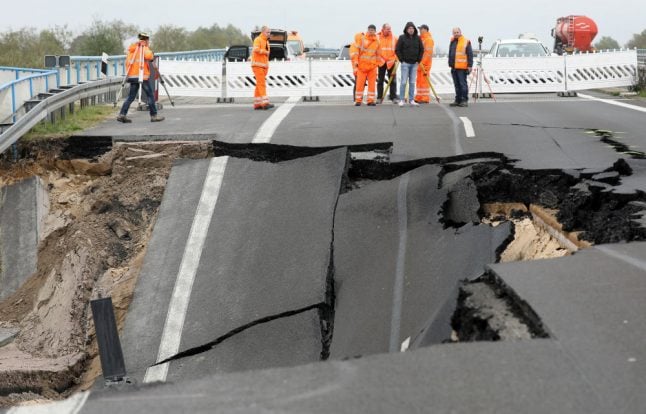 A sunken section of the A20 autobahn near Tribsees. Photo: DPA.

Vehicles can currently only travel in one direction on the section of the A20 near Tribsees in Mecklenburg-Western Pomerania. But now, a portion of the motorway is closing completely due to the danger the hole in the road poses.

The hole in the motorway could soon become even larger, which is why the lanes on the motorway in the other direction of travel are being closed.

The section between the Bad Sülze and Tribsees junctions will be affected beginning on Friday morning, the ministry of infrastructure announced in Schwerin, Mecklenburg-Western Pomerania on Wednesday evening.

“Daily measurements have shown that the road towards Szczecin (Poland) is also increasingly being affected by the road collapse and that the safety of road users can no longer be guaranteed,” said Manfred Rathert, head of the State Office for Road Construction and Transport in Mecklenburg-Western Pomerania.

In the lanes toward Rostock in the opposite direction, the road which was built on moorland recently collapsed – a length of about 100 metres. In this a huge hole of about 10 metres wide and 40 meters long with a depth of about 2.5 metres now exists. The traffic to Rostock has been diverted since the end of September.