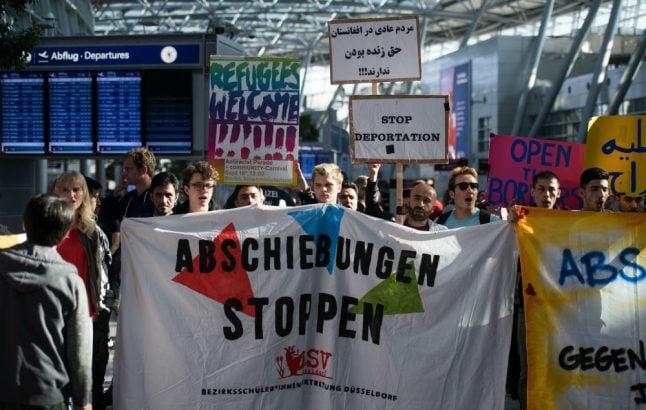 People protesting against the deportation of asylum seekers at Düsseldorf airport in September. Photo: DPA.

A chartered Czech plane with the Afghans on board, all of them men, took off late Tuesday from the eastern German city of Leipzig and arrived in Kabul on Wednesday.

The other three Afghans had refused to cooperate on establishing their identity, she added.

Saxony state interior minister Markus Ulbig told public broadcaster MDR that Germany was sending a “loud and clear message” that those not granted refugee status following an official review “no longer have a right to be in Germany”.

While Germany has granted safe haven to most asylum seekers from war-torn Syria, Berlin has argued that it can safely repatriate people to Kabul and other parts of Afghanistan, even as Taliban and Islamic State militants terrorize much of the country.

Around 150 demonstrators gathered at the airport in Leipzig to protest against the expulsions.

In Berlin, leading Greens MP Claudia Roth called on the government to stop the deportations, noting that some 250 people were killed in attacks in Afghanistan in the last week.

“Under these conditions, expulsions to Afghanistan clearly violate our responsibility to provide humanitarian protection,” she said in remarks reported by DPA news agency.

Germany resumed deportations of rejected asylum seekers from Afghanistan last month after suspending the process when a devastating truck bomb hit the Afghan capital in May.

That group of eight Afghans represented the sixth wave of repatriations of Afghans from Germany since December under a disputed Afghan-European Union deal aimed at curbing the influx of migrants.

Amnesty International warned European governments earlier this month that a surge of failed Afghan asylum seekers “forcibly” returned are at risk of torture, kidnapping and death.

Almost 9,500 Afghans went back to their homeland in 2016 after their applications for asylum in Europe were rejected, compared with fewer than 3,300 a year earlier, the rights group said.

Berlin has set a policy of returning to Afghanistan convicted criminals, people feared by police to be planning an attack, and those who refuse to cooperate with authorities or give their names.

More than 13,300 Afghans have applied for asylum in Germany since the start of the year.

Chancellor Angela Merkel has been struggling to bring down the numbers of asylum seekers after the arrival of more than one million migrants – mainly from Iraq, Syria and Afghanistan – since 2015.