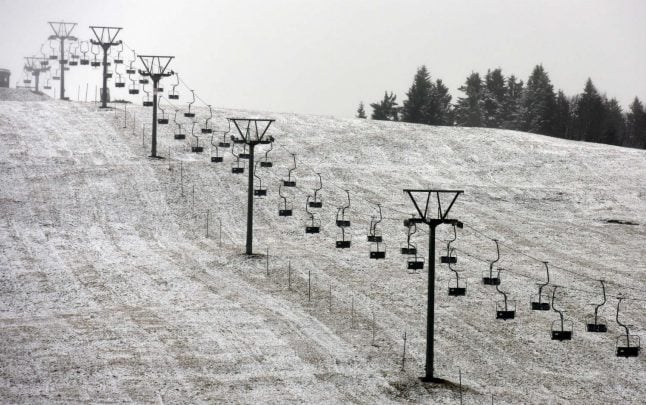 Almost two months before the official start of winter, snow has reached Baden-Württemberg’s biggest ski resort of Feldberg in the Black Forest. This snowfall, according to the German Weather Service (DWD), is the first snowfall after summer.

The 1,493m tall peak is part of Germany's highest mountain range and was covered with a thin layer of snow on Monday, although not yet enough for anyone to go skiing or tobogganing on.

Snow in this location isn't too unusual at this time of year.

In the rest of Germany, the weather remains very autumnal as the start of the week will be mostly cloudy and rainy.

The DWD forecasts thick clouds and patchy rain for Tuesday for most of the country, with some gaps in the cloud along the upper Rhine.

Temperatures will range from 10C to 17C at midday with lows of 8C in higher mountain ranges, according to DWD predictions. The outlook from Wednesday to Friday. Source DWD

Wednesday will be slightly more pleasant but will start off rainy with thick cloud continuing. Temperatures should rise to 13C-18C, with highs of 20 degrees in the upper Rhine region and the cloud should disperse over the course of the day, allowing the sun to shine sporadically through.

Thursday will also be cloudy, but the clouds are set to disperse with temperatures from 13-20C, with higher temperatures being seen in the south of the country.

Try and make the most of the rays down south as Friday is supposed to be rather gloomy nationwide, as strong cloud spreads across Germany and rainfall well and truly sets in.

The DWD paints a similar picture for the weekend as the weather is expected to be volatile, with showers over both days. There will also be gusty and sometimes stormy winds coming in from the west.
There is also the possibility of a light frost as nighttime temperatures of between 7C and 2C are expected.