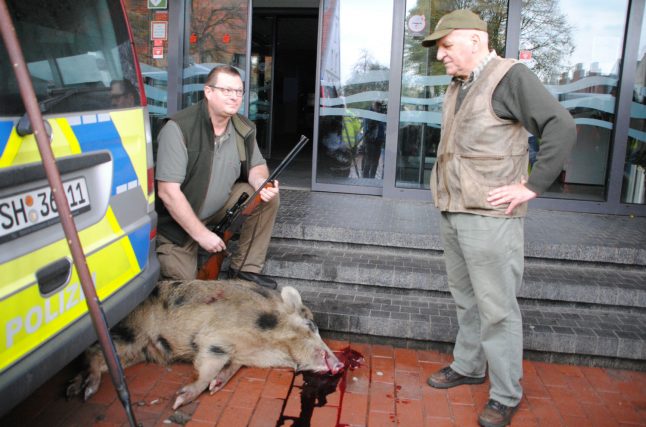 Uwe Ingwersen stands over the boar he shot in Heide on Friday. Photo: DPA

A male wild boar managed to get inside a Sparkasse bank shortly after 9am, forcing bank clerks and customers to run for cover.

Witnesses described how the animal ran to and fro between the entrance and the cashiers' desks, injuring the bank manager on his leg and causing one further person to lose a section of their finger.

As the dramatic scene unfolded, people inside had to be rescued via the buildings windows by fire crews .

The animals were first sighted at 9am and police soon warned the townsfolk to stay away from the town centre and to avoid leaving their homes.

“From what we know so far, the animals have run through the streets and into a bank and have already attacked and injured several people,” the first police report stated.

The pedestrian zone in the centre of the town was then cleared as hunters were called in to find and kill the animals.

The boar trapped in the bank eventually managed to get out by squeezing under a police vehicle that had been used to block off the entrance area. But a hunter was waiting for him and managed to kill him with his first shot.

“The first shot was enough,” said town mayor Ulf Stecher, who was there as the hunter killed the animal.

“That was an extremely unusual situation,” said Stecher. “I never thought we would see such a thing here.”

The other boar left town and returned to the forests before the hunter could shoot it, meaning police could give the all clear by midday.