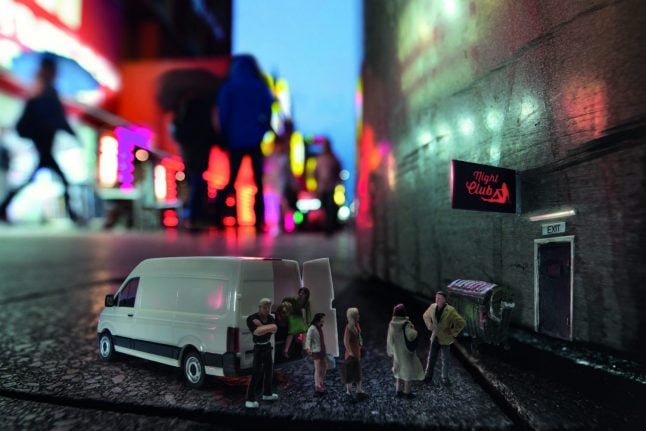 A project is taking place in the streets of Hamburg which shows miniature figures in situations where violence against women occurs, the Federal Families Office (BAFZA) announced in a press release this week.

The aim of the project, created in collaboration with the city's internationally famed Miniatur Wunderland museum, is to raise awareness about the violence and sexual harassment some women face every day.

Tourists and locals alike can find the ten miniature scenes scattered around the Hamburg city centre until Sunday.

The displays, examples of which are in the city's central station, Planten un Blomen park, and near the town hall, depict different kinds of violence against women, be it domestic violence, stalking, trafficking or sexual assault.

Some of the scenes show explicit violence in a domestic setting, but in others, the violence is less recognisable.

“Currently some forms of stalking or sexual harassment aren’t taken seriously by many. This makes it even more difficult for the victims to deal with the experience and seek help” explains Petra Söchting, leader of the helpline “Gewalt Gegen Frauen”.

Passersby are encouraged to post about the campaign, using the hashtag #hinsehen, meaning “take notice”. This links to the campaign's slogan “Hinsehen statt Wegschauen – Zeig Größe gegen Gewalt!” which prompts people to “Look instead of looking away – stand tall against violence!”.

The campaign hopes to encourage people to notice violence happening around them and do something about it.

“Not everyone is aware how widespread violence against women still is. With the campaign we want to raise society’s awareness of the issue and encourage society to look at it and deal with it” said Helga Roesgen, President of the State Office for Family Affairs and Responsibilities for Civil Society (BAFZA), in a press statement.

“Gewalt Gegen Frauen” is run by the State Office for Family Affairs and Civil Society Responsibilities (BAFZA) and employs 60 trained counsellors who offer free advice to women affected by violence.
Their advice is anonymous and confidential and they offer it in 17 different languages, including in German sign language.
The topic of violence against women has also hit the headlines recently because of the Harvey Weinstein scandal and the #MeToo movement, if you want to check out what Germans think about sexual harassment in Germany, take a look at our video here.

If you are a woman who is suffering from or has suffered from violence in the past and would like some support, you can call 08000 116 016,  24 hours a day, 365 days a year or visit the BAFZA website for a free consultation.