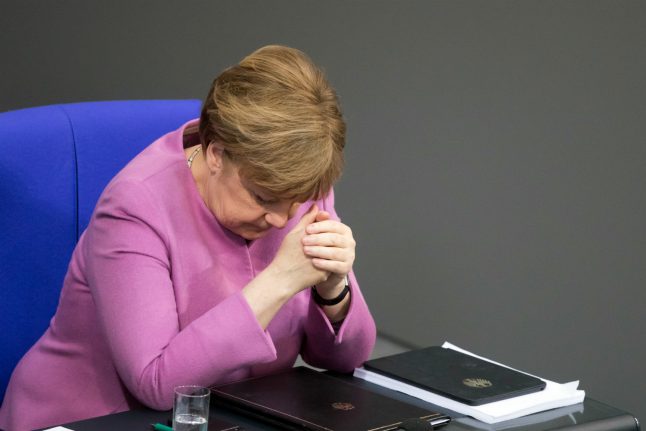 Merkel's conservatives, who won a September 24th vote without a clear majority, will hold exploratory talks with the liberal and pro-business Free Democrats (FDP) from 12pm  and then the left-leaning and environmentalist Greens from 4.30pm.

To avoid a breakdown that would force new elections, all sides will in coming weeks have to hammer out tough compromises on thorny topics from immigration to EU reform and climate policy.

If the initial talks Wednesday go well, all sides will meet jointly on Friday to launch negotiations that could form a government by perhaps January in the biggest EU economy.

READ MORE: These will be the likely conflict points in building a Jamaica coalition

The delicate negotiations come as Merkel, who has long ruled as a presidential-style chancellor, is increasingly described as a lame-duck leader in her final term, past the zenith of her power.

Critics are snapping at the heels of the veteran leader for delivering the worst poll result since 1949 for her Christian Democrats (CDU), followed by a state election loss last Sunday.

The usually pro-Merkel Bild daily condemned her insistence that she bore no blame for her party's defeat in Lower Saxony state, charging that she and her CDU “refuse to see what they've done wrong”.

“Up until two years ago Merkel appeared untouchable,” said the Sueddeutsche Zeitung daily.

“That aura of invincibility is now gone. Her power, too, is on the wane. If the CDU had any kind of challenger waiting in the wings, Merkel would have reason to worry.”

If trouble is brewing in Merkel's party, her more conservative Bavarian allies the CSU are in open disarray, fearing another poll drubbing in state elections next year.

Having long railed against Merkel's decision to allow in more than one million asylum seekers since 2015, the CSU has signalled a sharp shift to the right to win back voters from the anti-immigration Alternative for Germany (AfD).

The CSU's Alexander Dobrindt said Sunday's Austria election win of right-wing candidate Sebastian Kurz showed that the CDU/CSU must “position ourselves as a conservative force in these negotiations”.

Such talk only heightens distrust with the Greens, a party that emerged out of the 1960s and 70s protest movement against the Vietnam war and nuclear weapons, and which favours a multicultural society that welcomes refugees.

Greens leader Jürgen Trittin pointed to growing right-wing populist tendencies in the CDU/CSU bloc and warned that their hardline demands on the refugee issue would present “massive hurdles”.

Dobrindt, for his part, days ago warned that his party would tolerate no leftist “nonsense” from the Greens.

The other partner in the coalition talks, the FDP, are an easier fit, having previously served with the conservatives for lengthy stretches, until they humiliatingly crashed out of the Bundestag at the last election in 2013.

Its youthful leader Christian Lindner, who led the party back into the Bundestag, has presented his own tough demands as he eyes the powerful finance ministry.

On the eve of the talks, Lindner even cautioned Merkel to refrain from any bold moves at the EU level, especially if it cost German taxpayers, before a new government is formed.

“I expect that Merkel … makes it clear that her government is only performing a caretaker role,” he told the Frankfurter Allgemeine Zeitung.

“Germany is currently not in a position to take decisions.”

Given the competing interests, and weeks of haggling over posts and policy ahead, news site Spiegel Online predicted that “with a bit of luck, Germany may have a new government by January.”

“Germany is experiencing a strange phenomenon,” said the commentary.

“A new coalition is being negotiated by parties who don't really want it, while the aura and the power of the former and future Chancellor Angela Merkel is crumbling.”