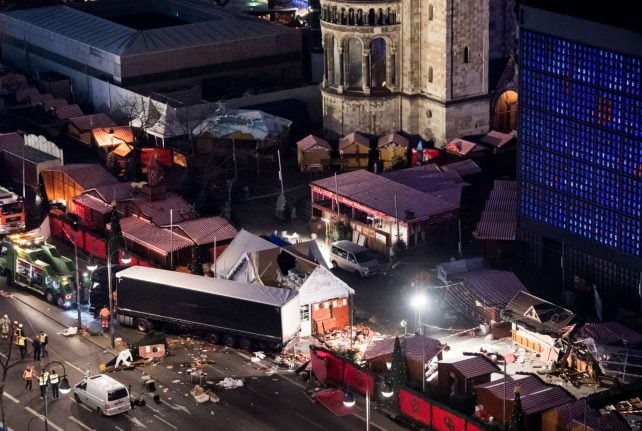 The scene of the attack at Breitscheidplatz. Photo: DPA

The final report by former federal prosecutor Bruno Jost found that Berlin police investigations into Amri before he drove a truck into a Christmas market last December were “full of mistakes” “insufficient” and “unprofessional.”

Jost was tasked by the Berlin interior ministry in April to look into possible failings in the monitoring of the Tunisian jihadist in the months before the attack.

Amri hijacked a truck on December 19th last year, killed its Polish driver and ploughed the vehicle through the market, claiming 11 more lives and wounding dozens.

In the aftermath of Germany's bloodiest jihadist attack, officials admitted a series of security failures that allowed Amri to register under multiple identities and evade authorities while he was in contact with Islamist militants. Immigration authorities had also issued Amri with a deportation order.

Jost was scathing in the report published Thursday, saying that authorities in Berlin and Baden-Württemberg dropped the ball on easy chances to put Amri in jail, despite the fact he was considered highly dangerous.

“You can’t just deal with a case like that of Amri in a run of the mill way, that isn’t adequate,” he said. “He was listed as a dangerous Islamist and his case was so regularly and so intensively discussed like few others. You can’t just act like you’ve arrested a petty thief.”

The special investigator found that, although Berlin police considered Amri to be the most dangerous Islamist in the city, they only put him under surveillance for a few weeks. Even then, the monitoring stopped on weekends and on public holidays. Jost came to the conclusion that it would have been hard to build a case against Amri on suspicion of planning a terror attack. But he said that there was enough evidence to imprison him for drug dealing due to recordings of his phone conversations.

But chaotic communications between departments in the Berlin prosecution service led to no one taking responsibility for the investigation, Jost found. The head of narcotics investigations claimed to the special investigator that he had no recollection of being told to investigate Amri.

The investigator also found that the justice system in Baden-Württemberg was culpable for Amri slipping through the net.

In the summer of 2016 the Tunisian was caught with two fake Italian ID cards in the southern state. But two days later he was released.

Jost found it incomprehensible how no arrest warrant was issued “despite long-standing, urgent attempts to deport him. From my point of view this would have been possible.”

“They did everything wrong you could possibly do wrong,” he said.

The special investigator laid some of the blame for the confused approach of state authorities at the feet of the refugee crisis of late 2015, when hundreds of thousands of migrants arrived in the country claiming asylum.

The registering of new arrivals often “did not meet the standards required by the law,” Jost found. In these circumstances it was no surprise that Amri was able to register in several places under several different identities, complicating the lives of investigators.