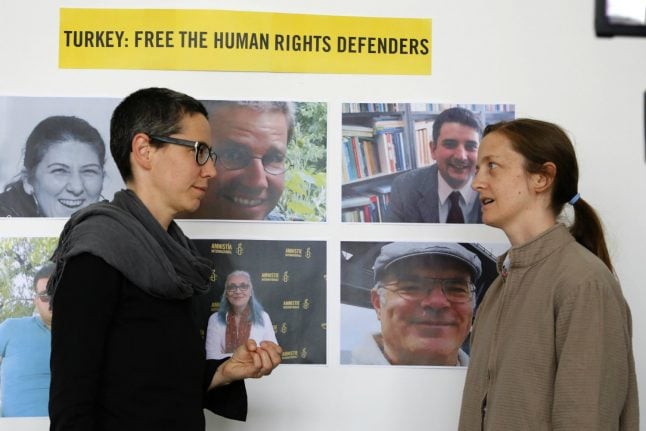 Germany, which has a citizen among those detained, denounced the charges as “incomprehensible”, while Amnesty attacked the indictment as “outrageous”.

The accused – who include the director of Amnesty Turkey Idil Eser, its Turkey chair Taner Kilic, several prominent Turkish rights activists as well as one German and one Swedish national – have been charged with “giving help to an armed terror group”, the Dogan news agency reported.

Prosecutors have asked for jail sentences of 7.5 to 15 years, Dogan said, without specifying the term sought for each suspect.

In the indictment, the activists are accused of seeking to create “chaos in society” similar to the anti-government protests that rocked Turkey in the summer of 2013.

Ten activists were detained in July in a raid by police on a workshop session of human rights activists run by Amnesty held on the island of Buyukada, a popular getaway spot off Istanbul.

A month before, Amnesty's Turkey chair Kilic had been remanded in custody on charges of links to the alleged mastermind of the July 15th, 2016, failed coup, the Muslim preacher Fethullah Gulen. Gulen rejects the accusations.

His case has now been merged with that of the other ten activists, and he faces the even more serious charges of “membership” of an armed terror group.

State-run Anadolu news agency said Kilic faced up to 15 years in jail and the other suspects from between five years to ten years.

“This outrageous indictment contains no new evidence but instead repeats absurd allegations against some of Turkey's most prominent human rights defenders,” John Dalhuisen, Amnesty International's Europe Director said in a statement.

He said the indictment simply was “little more than a tawdry patchwork of innuendo and untruths” that itself exposed the flaws of Turkey's judicial system.

The two foreigners – German Peter Steudtner and Swede Ali Gharavi – were leading the digital information workshop on Buyukada and have been under arrest ever since the July raid.

Steudtner's detention has stoked tensions in particular with Berlin, whose relations with Ankara have plunged in recent months.

Germany sharply criticized the mass crackdown that followed the failed coup which has included the detention of several German citizens.

German Foreign Minister Sigmar Gabriel said he saw “with great concern” charges being laid against Steudtner and the other activists.

He said the terror charges against Steudtner were “absolutely incomprehensible” and the threat of a jail term “unacceptable”, adding that Berlin had immediately contacted Ankara.

Amnesty describes Gharavi as an IT strategy consultant and Steudtner as a “non-violence and well-being trainer”.

Eight of the suspects – including both foreigners as well as Eser and Kilic – are being held in jail ahead of trial and three others free but still charged. It is not yet clear when the trial will start.

Those charged are accused of having links with various organizations outlawed by Turkey as terror groups including the Kurdistan Workers Party (PKK), the group of Gulen and the far-left Revolutionary People's Liberation Party-Front (DHKP-C).

Eser was accused of possessing material of the DHKP-C while Kilic was formally charged with being a member of Gulen's group and using the messaging system Bylock allegedly employed by his supporters.