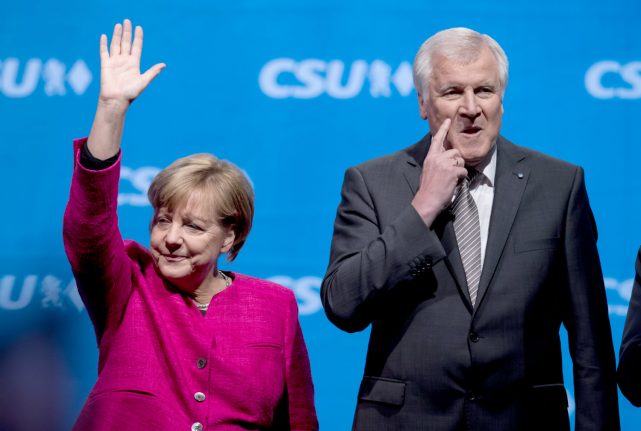 Her meeting from 1000 GMT with Bavarian sister party CSU kicks off weeks of exploratory coalition talks involving four parties, which will fight for ministerial posts and issues from EU relations to climate policy.

The trickiest questions centre on refugees after Merkel allowed in more than one million asylum seekers in the past two years — the decision that drove the shock rise of the far-right Alternative for Germany (AfD).

CSU leader Horst Seehofer, a harsh critic of Merkel's open-door policy, has revived his calls to cap refugee numbers at 200,000 a year — a demand Merkel has consistently rejected as unconstitutional.

Seehofer is in no mood to budge after his party too took a drubbing and lost many votes to the AfD, which ran on populist slogans such as “Stop Islamisation”.

He has vowed to close the party's exposed “right flank” with a tough stance on migrants and law and order, as he fights challengers snapping at his heels ahead of state elections next year.

Merkel's CDU too is nervous ahead of a Lower Saxony state poll next week, where it is running neck-and-neck with the Social Democrats (SPD), who are badly in need of a win after their bruising defeat in the September 24th election.

In a speech in the eastern city of Dresden on Saturday, Merkel said that the negotiations would be “difficult”, but added: “I hope the coalition will fall into place.”

The emergence of the AfD party, which scored 12.6 percent, has stunned Germany by breaking a long-standing taboo on hard-right parties sitting in the Bundestag.

Its success came at the expense of the mainstream parties, making it harder for Merkel to form a working majority.

Her best shot now — if she wants to avoid fresh elections that could further boost the AfD — is an alliance with two other parties that make for odd bedfellows, the pro-business Free Democrats (FDP) and the left-leaning Greens.

Such a power pact — dubbed a “Jamaica coalition” because the party colours black (CDU/CSU), yellow (FDP) and green match those of the Caribbean nation's flag — would be a first at the national level in Germany.

In the talks to come, all players must give a little to reach a compromise — but not too much, to avoid charges from their own party bases that they are selling out in a grab for power.

The smaller parties will seek to avoid the dark fate of Merkel's previous junior coalition partners: both the FDP and SPD have suffered stunning losses after governing in the chancellor's shadow.

Until the high-stakes poker games between party chiefs result in a working government, Merkel will be restrained on the global stage and in Europe, where French President Emmanuel Macron is pushing for ambitious reforms.

EU and euro politics, in turn, are shaping up as another divisive issue.

Merkel and the Greens have cautiously welcomed Macron's plans, but FDP chief Christian Lindner, who is eyeing the powerful finance minister's post, has assumed a far more sceptical tone.

He rejects any kind of “transfer union” — code for German taxpayers' money flowing to weaker economies — and said Europe must grow through “solidarity and competitiveness, not a failed policy of redistribution”.

Lindner has praised, however, Seehofer's tougher stance on migration, declaring that refugee numbers “must be reduced”.

The Greens, for their part, reject an upper limit, want to stop deportations of rejected asylum seekers to war-torn Afghanistan, and favour steps to help Syrian refugees bring their families.

Even if these issues are somehow resolved, the Greens will also push other core demands unpopular with the pro-business parties — including setting target dates to phase out coal plants and fossil fuel vehicles.

For now, these talks are down the road, expected to start after the October 15th Lower Saxony vote.

First of all, said CSU lawmaker Alexander Dobrindt, the CDU and CSU must establish whether they are “still sister parties”.