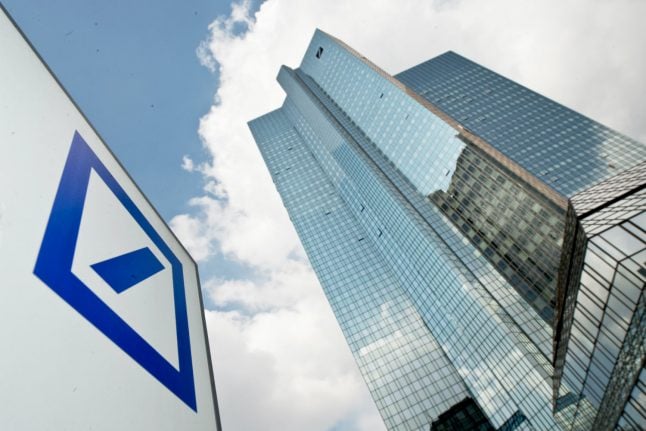 But the bank warns profits will never again reach the risk-fuelled heights of the pre-financial crisis era as it grinds through a deep restructuring, adjusts to new rules and adds thousands of jobs in regulatory compliance.

Deutsche “absolutely does not want to take unconsidered risks as it did in the past” as it girds itself to reconquer what it can of the lost ground, compliance chief Sylvie Matherat told AFP in an interview.

Its newfound strictness about financial regulation means the bank is “on track” to restore confidence among clients, she said.

Already, this autumn is far calmer for the Frankfurt-based group than last year's.

Back then, the United States Department of Justice slapped it with a $14.2-billion-dollar (12.2 billion euros) fine demand over its role in the subprime mortgage crisis, the trigger for the 2008-09 financial crisis.

Clients rushed to withdraw their cash from Deutsche's investment banking and wealth management arms, fearing it might finally go bust.

It could have been the last straw for the lender, which had pumped itself up into a global giant hoping to take on American mega-banks on equal footing since the 1990s.

In the end, Deutsche survived after bosses negotiated a cheaper – but still painful — deal to pay $7.2 billion in the US.

Unlike US competitors, Deutsche was slow to react to the financial crisis, and “should have begun cleaning up its balance sheet earlier,” said former Bank of France regulation chief Matherat, who joined Deutsche in 2014.

British chief executive John Cryan has chosen a path of reducing risks in its investment banking division, closing 200 branches across Germany and slashing some 9,000 jobs worldwide.

Even once those mammoth tasks are ticked off, “returning to pre-crisis levels of profitability isn't possible,” warns Matherat.

Deutsche basked in pre-tax return on equity of up to 25 percent before the crisis — although that was on a much less solid capital foundation than nowadays.

Two years of stinging losses and a string of capital increases later – the last for 8.0 billion euros in April — post-tax return on equity stood at just 3.2 percent by the end of June 2017.

READ ALSO: This is how much Deutsche Bank will pay the US for the financial crisis

Analysts expect nothing better from the bank in the third quarter, after a summer of muted activity on the financial markets where Deutsche still makes most of its revenue.

The lender ought to aim for the same ball park as its biggest rivals, which “have set objectives of around 10 percent net return on equity,” Matherat judged.

Shareholders have been hurt by a 7.0-percent fall in the stock's value since January, and are impatient to see the bank on a profitable footing — just another factor putting pressure on the board.

Before thoughts turn to driving up the bottom line, Deutsche has buttressed its risk control department, an expensive but vital bulwark that helps boost confidence among clients.

Matherat's division will grow to around 3,000 people by the end of 2018, spread between Frankfurt, Hong Kong, Singapore, London and New York.

The figure is 500 more than originally called for in the bank's plans.

“We will apply a simple rule: everything we can't check up on will be forbidden,” she insisted.

Deutsche hopes to have a system up and running by the end of the year to track client interactions from the first phone call to the final payment.

“Of course checks slow business down a little, but the important thing is for people to internalise them as if they had come up with them themselves,” Matherat said.

She believes that Deutsche can be one of the world's leading banks, but only if Europe and Germany can overcome their distrust of investment banking.

The EU is still working through the legacy of the crisis, including a planned capital markets union designed to make it easier for companies in member states to raise money in a single financial marketplace.

But if the Old Continent does not overcome its distrust of investment banking, the scheme “could be most beneficial to the usual American suspects while leaving big European banks, including ours, behind,” Matherat said.