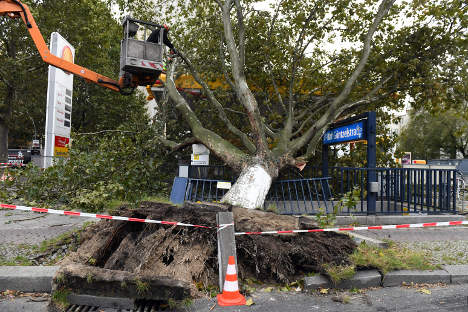 Seven people died on Thursday after their vehicles were hit by falling trees. Photo: Maurizio Gambarini/DPA/AFP

Storm Xavier hammered the country from late Thursday with winds that reached 130 kilometres (80 miles) per hour, uprooting trees and flinging signs and billboards to the ground.

Seven people died on Thursday after their vehicles were hit by falling trees.

The main train lines linking Berlin with Frankfurt and Munich were suspended, as all three cities were hit by the storm, leaving hundreds of passengers to spend the night in the stations, with some sleeping on trains.

Thousands of other commuters were also stranded by the storm.

Deutsche Bahn said many rail lines remained cut as of Friday night, but “traffic is going to resume gradually in the coming days.”

Starting Saturday, trains on the Berlin-Hanover and Hamburg-Hanover lines will again start running, while the Berlin-Leipzig line was already back to partial service on Friday.

But services between Berlin and Hamburg, a line that was “particularly affected”, will not resume before Monday, the rail operator said.

And the high-speed lines from Berlin to Frankfurt and Munich have been re-routed following the storm.

As of Friday night, regional trains in the German capital were still running only partial services as emergency crews removed fallen trees from the tracks.

DPA also said that in the northeastern state of Mecklenburg-Western Pomerania, 4,000 people were still without electricity on Friday, compared with 35,000 just after Xavier struck.