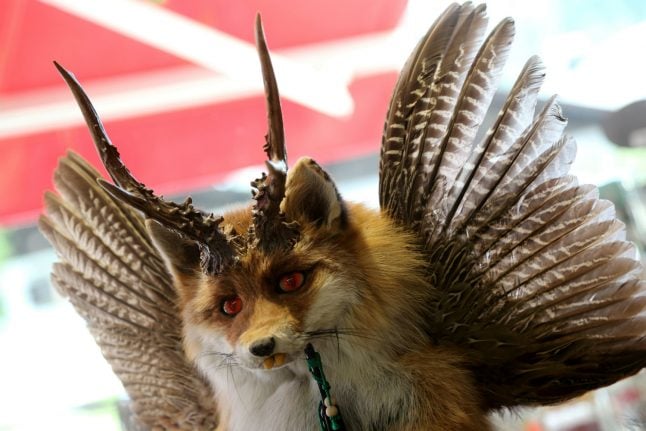 If you're ever in a Bavarian forest, keep an eye out for the Wolpertinger.

Also known by several variations on the name such as Wolperdinger, Woipertinger and Volpertinger, this mythological creature is a hybrid of several animals, but its origins appear to be fairly young, as mythical creatures go.

Although no one knows exactly when or why it came into being, it is commonly believed that the rise in popularity of the Wolpertinger myth over the past two centuries is due to the emergence of stuffed incarnations of the animals, created as a bit of fun by Bavarian taxidermists in the 1800's.

But locals have been known to spin a slightly more outlandish tale of a romantic involvement between a hare and a roebuck. The story goes that their children had the body of a hare but the horns of a deer.

Soon after, a fox and a duck, and a pine marten and a pheasant followed suit. All their strange offspring supposedly crossbred, which explains why no two Wolpertinger look alike.

These bizarre hybrids were sold to gullible tourists as “local wildlife” throughout the 19th century and continue to be made to this day.

As time went on Wolpertinger have become more and more outlandish and it is now common to find creations with parts from four or five preserved and stuffed animals fixed together.

Generally, a Wolpertinger involves a mammal with the horns of a deer and the wings, feet or beak of a bird.

Wolpertingers were even exhibited in the Deutsche Jagd- und Fischereimuseum throughout the 20th century.

According to legend, anyone who wants to see a Wolpertinger alive in its natural habitat must be an attractive, single woman and needs to visit a forest in the Bavarian Alps during a full moon, accompanied by the “right man.”

For those seeking to see a Wolpertinger for themselves in decidedly less questionable circumstances, these stuffed creations can be found decorating traditional hotels, restaurants and pubs throughout Bavaria.

You can also click here to visit our Wolpertinger Gallery to view some of the more weird and wacky incarnations.

Wolpertinger created based on the painting 'Osterhase' by Albrecht Dürer

Correction – this article originally stated that this painting was by Albrecht Dürer. But in fact, it was his original painting of a young march hare which was used and edited by artist Rainer Zenz to create this depiction of a Wolpertinger.