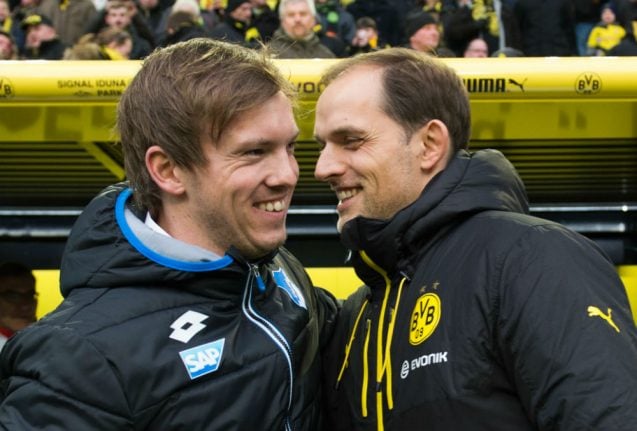 Julian Nagelsmann and Thomas Tuchel greeting each other at a football game in 2016. Photo: DPA.

Borussia Dortmund's scrappy 2-1 win at Augsburg was branded “the worst since I arrived” by coach Peter Bosz, but was good enough to leave them five points clear of second-placed Bayern.

Willy Sagnol, Bayern's caretaker coach for Sunday's 2-2 draw in Berlin, looks to have lost another star with Franck Ribery sidelined by injury with Manuel Neuer already out.

Here are five things we learned from the seventh round of German Bundesliga matches:

Bayern are hunting for a new coach after Ancelotti's dismissal last Thursday with ex-Dortmund boss Thomas Tuchel and Hoffenheim's Julian Nagelsmann among the favourites.

Tuchel, 44, was dismissed by Dortmund in May after a disagreement with CEO Hans-Joachim Watzke, but is seen as one of Germany's top coaches.

Bayern will use this week's international break to finalise Ancelotti's replacement, but experts differ over whether Tuchel is the right man.

“He is a very clever person, has a lot of ideas about football and will fit in very well at Bayern,” said Germany star Sami Khedira.

“He is first-choice for Uli Hoeness (Bayern's president) and if you want something, you want the A1 solution,” said the 56-year-old.

“Until he comes, they may need someone to carry them over, but in that case it won't be Tuchel.”

The Gabon hot-shot had a howler when he weakly fired at Augsburg goalkeeper Marwin Hitz in the 80th minute of Saturday's 2-1 win at Augsburg.

“'Auba' will take them,” said coach Peter Bosz when asked whether he will change his penalty taker.

“It wasn't good against Augsburg, that's clear, but he'll only have a bad game like that perhaps twice a year – and he already has one behind him.”

Germany striker Timo Werner sat out RB Leipzig's win at Cologne on Sunday after being taken with dizziness in last Wednesday's Champions League defeat at Besiktas.

The 21-year-old was in clear distress in Istanbul and complained of pains in his ears due to the crowd noise at the Turkish side's stadium.

Leipzig say he has a problem with the muscles in his spine and neck, caused by a heavy playing schedule.

His club say it is doubtful Werner will link up with the Germany squad for Thursday's World Cup qualifier away to Northern Ireland in which Germany need a point to qualify for Russia 2018.

Hamburg and Werder Bremen are relegation contenders after Saturday's dreadful north German derby ended in a goalless draw with both clubs now in the bottom three.

In total, 40 fouls were committed in Hamburg to dampen the hosts' 130th anniversary celebrations.

Bremen's reserve goalkeeper Michael Zetterer picked up one of the four yellow cards for challenging a decision from the bench.

It was his second booking this season as a substitute – and he has yet to play a single minute of league football.

Cologne are bottom with a solitary point from seven games, but coach Peter Stoeger is not in danger of becoming the third German league coach sacked this season – for now.

“Just because the team are playing badly doesn't mean we have to make changes,” said club director Joerg Schmadtke.

Having signed veteran Claudio Pizarro, who turns 39 on Tuesday, Cologne hope the league's top-scoring foreigner will add to his tally of 191 goals for Bayern and Bremen.