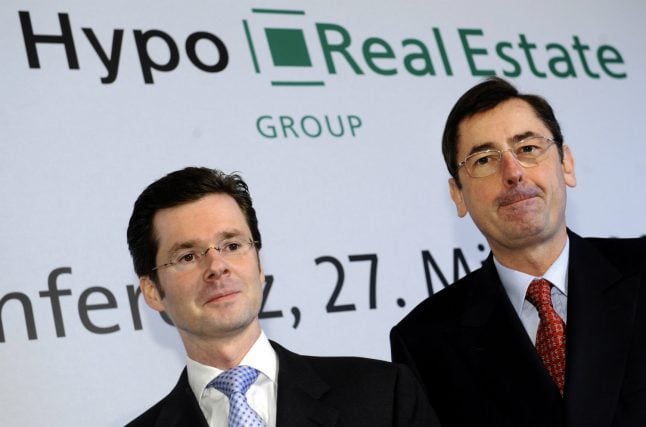 The executives were accused of contributing to the institution's woes.

The regional court in the southern city of Munich threw out the charges against Georg Funke, the former chief executive of Hypo Real Estate (HRE), who had allegedly covered up the bank's woes at the height of the crisis.

Former chief financial officer Markus Fell, who was also in the dock, was ordered to donate 25,000 euros in exchange for the charges being dropped.

The court cited a “lack of sufficient evidence” against the two defendants in approving the settlement, which the prosecution and the defence also agreed to.

Funke was sacked from the later nationalised HRE in late 2008.

He and Fell, who was also accused of stock price manipulation, faced up to three years in prison as well as fines.

Both denied the charges.

HRE got into trouble after the failure of US investment bank Lehman Brothers in September 2008 exacerbated cash-flow problems at HRE's Irish unit Depfa Bank.

During the crisis, Chancellor Angela Merkel's government desperately cobbled together the state-led rescue of the mortgage lender worth more than 100 billion euros to prevent its collapse from triggering a chain reaction throughout the entire German banking system.

Many former shareholders lost heavily in the collapse of HRE. It returned to profit in 2011 after its holdings of Greek debt were transferred to a so-called “bad bank”.