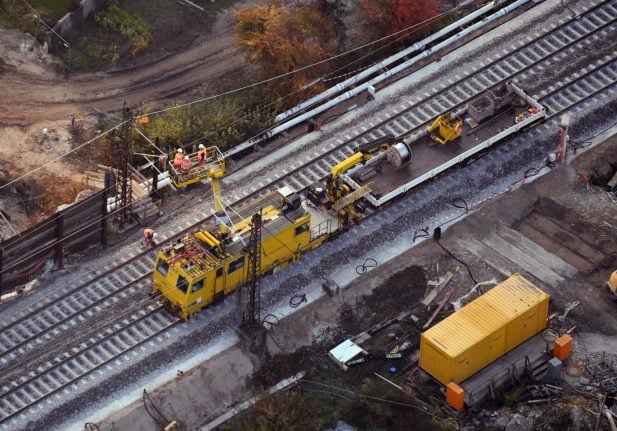 A section of the Rheintalbahn 90 kilometres west of Stuttgart in Baden-Württemberg, had to be shut down with immediate effect in mid-August after a mishap caused the tracks to sink.

On August 12th after a slab of concrete blocked the high-speed tunnel which is currently being built under the train line. The blockage led to flooding in the tunnel and caused the train track to sink into the ground.

During normal service, some 30,000 commuters travel along the route every day. Meanwhile, 200 freight trains travelling between Italy and the Netherlands use the line, which is one of the most important pieces of rail infrastructure linking northern and southern Europe.

But for the past seven weeks trains have been redirected and commuters have been put on buses, as Deutsche Bahn has worked around the clock to fix the problem. But there have nonetheless been significant delays, with freight trains queueing up in Genoa and Rotterdam. Freight deliveries have been cut in half, with the situation in the Italian and Dutch ports described as partially chaotic.

The repair works are now complete and the line will reopen on Monday, Deutsche Bahn has confirmed.

But that is far from the end of it.

The network of European Railways (NEE) is threatening legal action against Deutsche Bahn after incurring an estimated €100 million in costs. It claims the German state-owned rail provider failed to create a plan B for the event of a sudden disruption on the line.

Moreover, work on the new high-speed tunnel is set to be delayed for two years after Deutsche Bahn solved the problem by filling the affected tunnel with 10,500 cubic metres of cement. The drill that was being used to bore out the tunnel was even blocked inside by the concrete.

Deutsche Bahn bosses now reckon that the tunnel will open in 2024, two years later than planned.