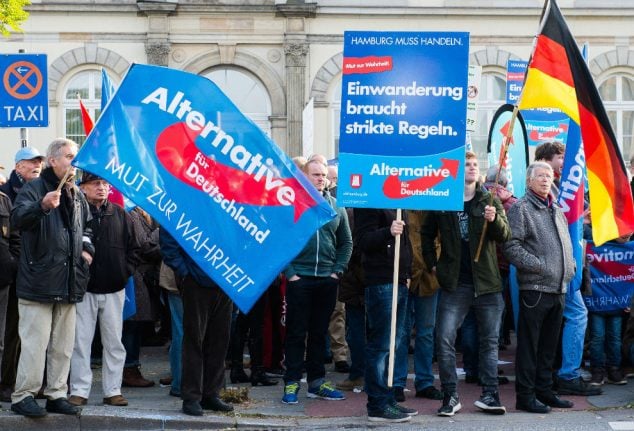 “Honestly speaking, on several occasions I reviewed my conscience and asked myself whether this party was actually radically right-wing before I decided it wasn't,” Berlin native Martin admits.

He says he has concerns that extremists might take over the party and adds that he doesn't like it when their supporters “go too far and start screaming for asylum seekers to get out.”

Nonetheless, refugees were at the forefront of his mind when he entered the polling booth and put a cross next to the AfD. He describes the government's decision to open German borders to refugees in the late summer of 2015 as leading to “uncontrolled migration” that has allowed “terrorists, murderers and rapists” into the country. He also states his belief that many people who came to the country weren't really fleeing from persecution.

“Merkel should have at least got authorization from the German parliament before opening the border,” he says. “Instead she did her thing without any debate or coordination with German citizens. The controlled and orderly distribution of migrants to all EU countries from the outset subsequently didn’t happen.”

It is dangerous to make generalizations about what makes a typical AfD voter. Studies show that stereotypes about them being poor or badly educated don't bear much relation to reality.

READ ALSO: Why Israel doesn't really know how to deal with the AfD

But a clear trend is that the far-right party are much more popular in east Germany than in the west, and that they are more popular among men than women. Indeed, if east German men had decided the outcome of the election alone, the AfD would now be forming the government as Germany's largest party.

Martin himself grew up in east Germany. But the 29-year-old doesn't fit the rest of the stereotype of an AfD voter. A young Berliner, he works in the media industry and says he has a multicultural groups of friends.

He refers to his east German roots when talking about an AfD campaign poster which encouraged Germans to have more kids with a picture of a heavily pregnant white woman.

“I grew up in east Germany in the 90s when we had a demographic problem and Germans needed to have more kids,” Martin explains, adding that he can’t understand why bringing up this issue twenty years later is racist. An AfD campaign poster spotted in Berlin before the election in September. It reads: “'New Germans?' We'll make them ourselves.” Photo: Shelley Pascual.

‘They are the new CDU’

While the AfD performed most strongly in former East Germany, they are far from a phenomenon that can simply be blamed on “backward Ossis.” Across the former west they increased their vote share in comparison with the last election in 2013.

In Lower Saxony, they won 9.1 percent of the vote, beating the Greens, a party with a much longer tradition of support in the former west.

Jan, a lawyer in his 40s based in Lower Saxony, says he had previously voted for Merkel's Christian Democratic Union (CDU) for 20 years, but couldn't bring himself to do so this time because that would be “putting Germany as a whole in danger.”

“The CDU moved far to the left, leaving an open space on the right. This space has now been filled by the AfD,” he said.

Like Martin, the refugee policy pursued by the Merkel government was clearly the decisive factor that led him to desert her CDU party.

The refugees who arrived in late 2015 were primarily “not the clever and well-educated Syrians who had already left Syria for attractive countries like the US, Canada or Australia before the migrant wave,” he claims.

“It’s almost impossible to get rid of people who come here and don’t want to support German society. So I thought there was a need for a movement that spoke up against this.”

Jan stresses that, after thinking long and hard about it, he didn't end up voting vote for the AfD, but he calls them “good for democracy.”

There are two groups of foreigners in Germany, he says: “those who damage the state by doing things like selling drugs or taking advantage of social benefits and those who come to Germany intending to work hard and to contribute towards the state.”

“If the other parties had listened to what their voters and their party members were telling them, and if people had been allowed to voice their concerns critically about migration, the AfD wouldn’t exist today,” he argues.

‘Not a big fan of globalization’

Ramon D’Avila, a German-American communications consultant based in Braunschweig, Lower Saxony, stresses that he isn't against immigration per se. He has himself lived in countries such as Slovakia and Vietnam.

“What I am against however is migrating to a country with the expectation to benefit from social welfare,” said the 32-year-old, who gave his first and second vote to the AfD.

He states that when people from certain parts of the world bring with them cultures and religions that clash with German society, this is “not good for western values in general. People who are Muslims are welcome in Germany, but their ideology isn't.”

An asylum seeker arriving in Munich in September 2015. Photo: DPA.

But he makes clear that it isn't just immigration policy that struck a chord with him. He also likes the AfD's emphasis on national sovereignty.

“I'm not a big fan of globalization. In general I am a supporter for each country to be able to govern its own affairs whether here in Europe or on another continent,” he says.

The AfD courted controversy throughout the election campaign, with their campaign leader Alexander Gauland calling for a left-wing politician with Turkish roots to be “dumped” in eastern Turkey. He also said that Germany should “be proud” of the achievements of its soldiers in the Second World War.

But D’Avila doesn’t think a party entering the Bundestag that had provocative campaign posters and represented by politicians such as Gauland reflects badly on Germany.

“Germany occupies a special place in history, but a lot of people kind of exploit this to their advantage. No other countries have a clean slate,” he states.

For D'Avila, the AfD has opened up discussions that have been taboo for far too long; he considers the party to be a beacon of change.

“The result of this election provides the chance to actually see what a new party is able to do. [Let's] see how they’re going to act in parliament and let their actions prove what they really think and want to do.”