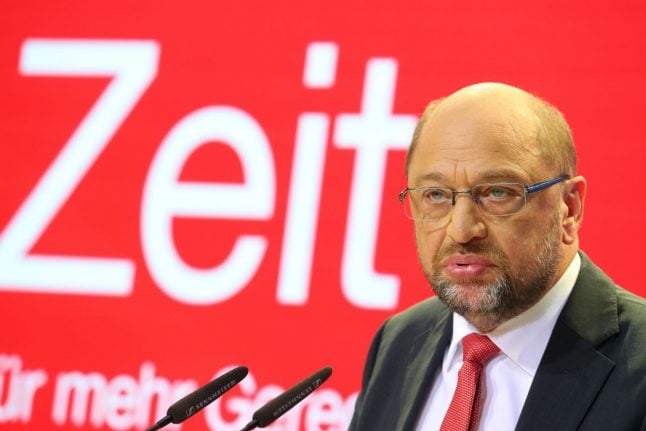 "I’m pretty sure that we will have a last minute swing." Martin Schulz. Photo: DPA

1. “Anger is a creature that grows the more it is attacked”

Jung von Matt, the man responsible for campaign advertizing for Angela Merkel's Christian Democrats (CDU) made this rather prescient observation about how resentment grew against the mainstream parties as they and the mainstream media repeatedly condemned the tone of the anger.

2. “Whistles and heckling certainly won't do anything to shape the future of Germany”

The 2017 election has been dubbed by certain sections of the press the Wutwahl (election of rage) after Merkel was hounded on the campaign trail by angry AfD voters who tried to disrupt her speeches.

She responded at one speech by telling them “whistles and heckling certainly won't do anything to shape the future of Germany.”

Needless to say, they didn't listen. Although now that the AfD are the third largest party in the Bundestag, they might also argue that heckling can get you further than anyone expected.

3. “We have the right to be proud of our soldier’s achievements in two world wars” The aggressive right-wing campaign of the AfD was led by their 76-year-old Spitzenkandidat Alexander Gauland. On several occasions he made his small party the focus of national debate with outrageous comments.

As well as saying that a political opponent should be “dumped” in Turkey, he told supporters that, if France can be proud of Napoleon and Britain can be proud of Churchill, Germany also has the right to be proud of what its soldiers did in two world wars. It is perhaps the most controversial thing to yet be said by an AfD politician in public, but it didn't harm their polling figures.

4. “I’m pretty sure that we will have a last minute swing”

Martin Schulz, the leader of the Social Democrats, managed to stay positive to the end, claiming days before the election that his party would benefit from “a last minute swing.” Instead their popularity dropped even further than their already miserable polling numbers, and they slumped to the worst result in their history.

5. “The Greens won’t enter any coalition that doesn’t initiate the end of the combustion engine”

Green party leader Cem Özdemir made this comment during campaigning. Now negotiating to enter the government for only the second time ever, the Greens plan to put environmental protection firmly at the centre of the new government's policy. First on the list will be pressuring Germany's car industry to ditch diesel engines. 6. “A witch hunt has been started against diesel and the whole car industry”

Free Democrats (FDP) leader Christian Linder had this to say in August about how environmentalists had been attacking the diesel engine in the wake of Volkswagen's dieselgate scandal.

Lindner claims that current attempts to reduce pollution in German cities are based on emotion, not rational argument. He wants to see more support for the car industry.

Oh, and he also has to come to terms with the Greens on a “coalition agreement” before a new government can be formed.

7. “When I’m on the street, I can’t tell if someone is a German citizen just by looking at them”

Angela Merkel said this to AfD chairman Jörg Meuthen during a round-table between party leaders live on television hours after the results came in.

Meuthen had at first tried to claim that the AfD's understanding of being German included migrants from all types of backgrounds. But the facade slipped minutes later when he complained about visiting inner cities and barely seeing any Germans.

Merkel's response was to ask how he knew whether someone was German just by looking at them.