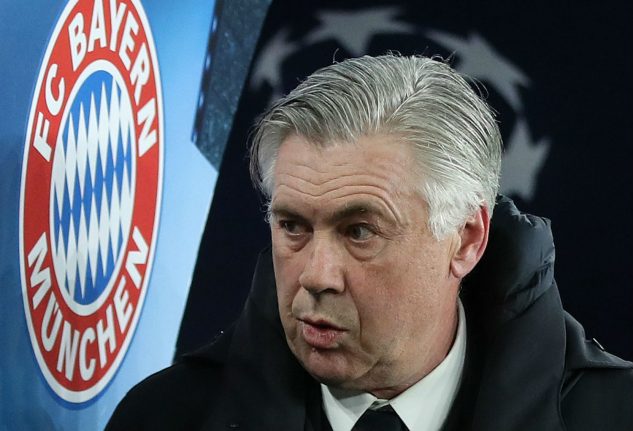 “Following an internal analysis in Munich on Thursday 28 September 2017… the club is to part company with head coach Carlo Ancelotti with immediate effect,” Bayern said in a statement on their website.

Former player Willy Sagnol, the ex-France international who had been serving as an assistant to Ancelotti, has been named interim coach.

Pressure had already been building on Ancelotti with Bayern enduring an inconsistent start to the season before losing 3-0 to PSG in the French capital on Wednesday.

After that game the Italian was questioned by German media about his tactics and team selection, following his decision to leave Franck Ribery, Arjen Robben and Mats Hummels on the bench at kick-off.

“The performance of our team since the start of the season did not meet the expectations we put to them,” said Bayern chairman Karl-Heinz Rummenigge.

“The game in Paris clearly showed that we had to draw consequences. Sporting director) Hasan Salihamidzic and I had an open and serious discussion with Carlo today and informed him of our decision.

“Carlo is my friend and will remain so, but we had to make a professional decision in the interests of FC Bayern. I now expect the team to have a positive development and top performance, so we can reach our goals for this season.”

Bayern are currently third in the Bundesliga table after six games, three points behind leaders Borussia Dortmund, before visiting Hertha Berlin on Sunday.

They have not been so far off the pace at the top of the Bundesliga so early in a season since 2010/11, when Dortmund went on to win the title and Bayern finished third.

Ancelotti, 58, led Bayern to a fifth consecutive Bundesliga title last season in his first campaign in charge after succeeding Pep Guardiola at the Allianz Arena.

However, the Bavarians lost to Real Madrid in the quarter-finals of the Champions League and to Dortmund in the semi-finals of the German Cup.

Among the potential replacements being mentioned is Thomas Tuchel, currently a free agent after leaving Dortmund at the end of last season.