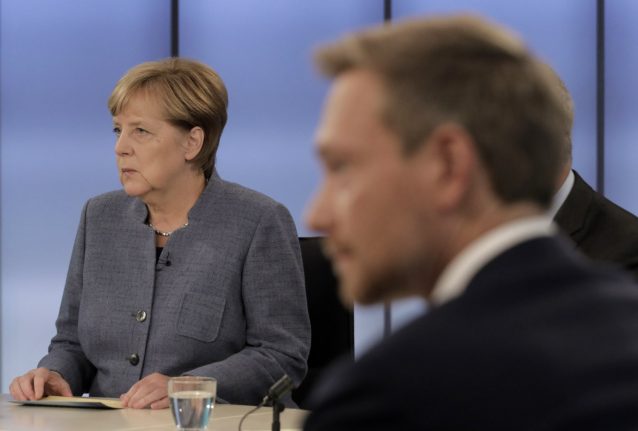 Merkel was to hold meetings at the Bundestag lower house, where her conservative CDU/CSU group saw its number of seats axed to 246 from 309 previously following its worst poll showing in seven decades.

Joining her at the glass-domed Reichstag parliament building for the first time were the 93 deputies of the Alternative for Germany, a party branded far-right by many German media outlets and officials.

“The language of the campaign is different than the one in parliament,” one of the party's leading members, Alexander Gauland, told reporters outside the main chamber.

“We know that we have a big responsibility in parliament, also to our voters.”

Gauland, a CDU defector, had sparked outrage in the run-up to the election for incendiary comments, including urging Germans to be “proud” of their WWII veterans and calling for a government official who is of Turkish origin to be “dumped in Anatolia”.

The AfD poached support from both mainstream camps, the conservatives and the Social Democrats (SPD), junior partners in the “grand coalition” that has led Germany for eight of Merkel's 12 years in power.

A total of five million voters turned their backs on the governing parties, and 1.5 million of them voted for the AfD.

According to opinion polls, most of those voters pointed to anger over Merkel's border policy, which allowed more than one million asylum seekers into the country since 2015.

But after the SPD scored a humiliating 20.5 percent, a post-war record, it ruled out further cooperation with Merkel, meaning her search for a ruling alliance became infinitely more complicated.

From Bavaria to Jamaica?

Commentators said Tuesday that Merkel's only other option – trying a link-up with the pro-business Free Democrats (FDP) and the ecologist Greens – would be fraught with risk.

The grouping has been dubbed a Jamaica coalition for the parties' colours matching the Caribbean nation's flag.

The daily Bild, which had called the election a “political earthquake”, reported that party leaders had spoken by phone late Sunday about the possibility of working together in Merkel's fourth term.

Germans also seem to have warmed to the idea, with a poll by the independent Infratest dimap institute showing 57 percent support.

However strong ideological differences could hinder the alliance.

“There are many booby traps among the issues for a possible Jamaica coalition,” political scientist Juergen Falter of the University of Mainz in western Germany told Bild.

He noted that the Bavarian sister party of Merkel's CDU, the Christian Social Union, a frequent critic of her asylum policy, had its backs to the wall after suffering particularly heavy losses in the election.

With a poll looming in the southern state next year, Falter said the CSU's stance on immigration was likely to harden, putting a deal with the Greens in particular out of reach.

The Greens and the FDP are also far apart on deepening EU integration, military spending and the response to the diesel crisis given Germany's outsized dependence on the car industry.

“The coalition talks will be extremely thorny because the small parties will have a bigger say and Jamaica is the only option,” Falter said.

Merkel has said she hoped to have a new government in place by Christsmas but right-leaning daily Die Welt warned a stalemate could spark new elections.

Few expect coalition talks to start in earnest until after a snap poll on October 15 in Lower Saxony state, home to Volkswagen.