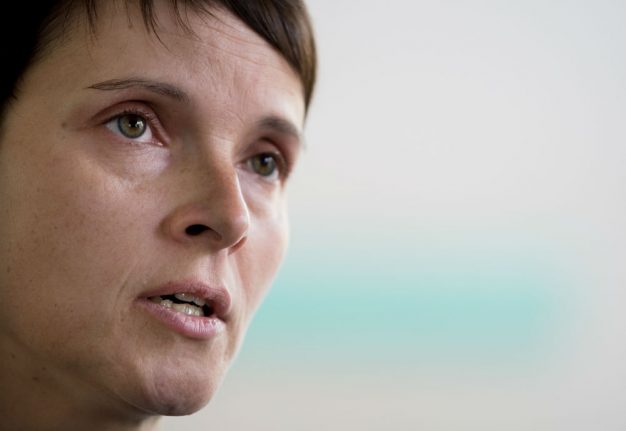 Frauke Petry speaking at a press conference on Tuesday in Dresden. Photo: DPA.

Party co-leader Frauke Petry had already shocked her colleagues on Monday when she announced she would not join the AfD's parliamentary group in the Bundestag because of “dissent” with more hardline colleagues. Instead she will serve as an independent MP.

The announcement soured the mood at the AfD, which was celebrating its historic feat of sending 94 MPs to the Bundestag after capturing 12.6 percent of the vote.

While Petry did not say when she would officially quit the party, she said in Dresden on Tuesday that “it is clear that this step will follow,” according to remarks carried by German media.

“I spoke today with the group, and we came to an agreement, that I will leave the state parliamentary group and the party on Friday,” he told the Die Welt newspaper.

Pretzell said his decision stemmed from his “not very optimistic view on the development of the AfD”.

Separately, four other local MPs have quit the AfD's group in the state parliament of Mecklenburg-Western Pomerania.

Although its beginnings as an anti-euro party were rooted in populism, the AfD's rhetoric veered further right in the run-up to Sunday's elections.

Key members challenged Germany's culture of atonement over World War II and the slaughter of six million Jews in the Holocaust. An AfD poster spotted in Berlin a few weeks before the election on September 24th. Photo: Shelley Pascual.

It also rolled out provocative posters declaring “Burkas? We prefer bikinis” and “New Germans? Let's make them ourselves”, featuring a heavily pregnant white woman, to push its anti-Islam and anti-migrant campaign.

Petry, 42, stirred controversy when she appeared in a campaign poster with her newborn child, with the slogan “What is your reason to fight for Germany?”