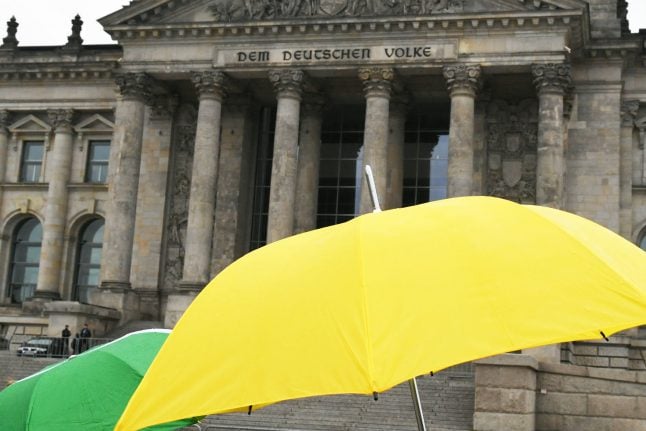 In the late summer of 2015 Angela Merkel was faced with the choice of whether or not to open Germany's borders to refugees who were crossing into Europe from war-torn Syrian in their tens of thousands. The Chancellor opened the borders, offering Syrian refugees hope and relieving the pressure on southern Europe.

But as hundreds of thousands of people entered the country, far-right populists portrayed the decision as a plot by the Chancellor to destroy German culture. It was a xenophobic conspiracy theory, but it seemed plausible to disgruntled voters, who nicknamed Merkel the Volksverräter (traitor).

Meanwhile the Chancellor's unwillingness to address the real problems brought by the refugee influx – an increased terror threat and a spike in sexual assaults – made it seem to many that she had lost touch with reality.

The refugee crisis wasn't the only defining issue of the last legislative period, though. The government signing off on a further bailout for the stricken Greek economy in the summer of 2015 was deeply unpopular among conservative voters. Both crises meant that Merkel's CDU party had a soft underbelly at this election ready to be exposed by smaller right-wing parties – and they duly did so.

The Free Democrats, claiming that they would impose stricter rules on how money is shared across the EU, have surged back into parliament, largely thanks to CDU voters switching allegiance. Almost 1.4 million CDU voters switched to the FDP on Sunday, making up a third of their overall vote.

Meanwhile close to a million former CDU voters put their lot in with the far-right Alternative for Germany (AfD), the most vocal critics of Merkel's refugee policy.

Together the two small parties went from not having a single MP to holding a likely 174 seats. At the same time Merkel's CDU and CSU alliance was the biggest loser of the evening, leaking over 2 million voters and scoring their worst result since the 1940s.

… but gained from it too

The paradox of the election is that, as much as international instability hurt Merkel, it helped her too. Germans perceive a world in which Donald Trump is the US President and Britain wants out of the EU as an unstable, unsettling one. In these uncertain times they don't want a newbie to speak for them in the world.

Research by Forschungsgruppe Wahlen shows that, in the eyes of most voters, Merkel is considerably more competent and trustworthy than her only serious rival, Martin Schulz from the Social Democrats.

Some 51 percent of voters thought she had more expert knowledge than Schulz, while only 8 percent thought the opposite. Meanwhile 59 percent said she was the right person to lead Germany in troubled times, while just 10 percent said the same of Schulz.

Germans aren't known for liking risk. And the simple fact that Merkel has been around for so long apparently counts in her favour. Unlike in Anglophone countries, the maxim that “familiarity breeds contempt” doesn't hold much truth in German politics.

Who are the SPD?

In a time when Jeremy Corbyn has managed to mobilize young and working class voters in Britain, and Bernie Sanders did the same in the US, one might have expected a little more from the centre-left SPD in this election. But analysis of the election result shows that they have little clout with young voters in the 18-29 demographic, around 20 percent of whom gave them their vote. Even the unfashionable CDU won over more young people than them. So the SPD are neither young, nor working class, nor apparently even a party with a left-wing identity. How their leadership sorts out this muddle and pulls them back from the worst result in their history beats us.

It is something of an oversimplification, but it's not wholly wrong to say there are two party systems in Germany – a party system in the east and another one in the west.

In former West Germany the far-left Die Linke barely make it over the 5 percent hurdle necessary to get into parliament, but they are the third largest party in the former east behind the CDU and the AfD.

The AfD were the biggest party overall in the eastern state of Saxony and were the second largest party in three of the other states of former east Germany.

In North Rhine-Westphalia, Germany's most populous state on the border with the Netherlands, the AfD won 8 percent of the vote, putting them 23 percent behind the SPD in second.

The SPD were only the fourth biggest party in the east. If they want to figure out how to become a party of power again, they should probably spend a little more time in cities like Dresden and Leipzig.