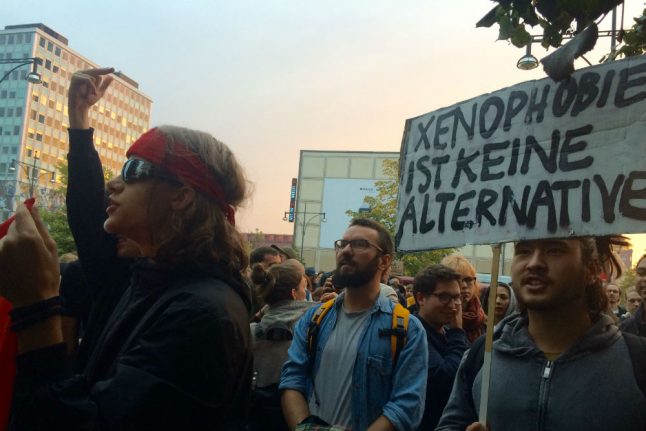 A protester in Berlin on Sunday holds a sign that says "Xenophobia is not an alternative." Photo: Shelley Pascual.

Around a thousand people on Sunday gathered in front of a club where the AfD was celebrating in central Berlin, shouting “Nazis out” and “all of Berlin hates the AfD”.

One of the demonstrators, a young woman named Sophie, told The Local it was important to show the AfD “what happened in history should never happen again,” despite Germany's democratic values.

Even though we are a democracy, we have to show @AfD “what happened in history should never happen again.” -Sophie #btw17 #protest #Berlin pic.twitter.com/RAn1um55AS

58-year-old Karsten Schiffler was also present at the protest. He told The Local he was “speechless” at the notion that the AfD would be entering German parliament, calling the party “racist and nationalist.”

Dozens of police officers blocked off the club's entrance and made a handful of arrests over “small incidents,” a police spokeswoman said.

Smaller protests were held in other German cities, including Cologne in the west, where around 400 people gathered, and in the northern port city of Hamburg, where demonstrators were marching towards the party's local headquarters.

On the Internet, many people expressed their discontent at the right-wing party’s strong results, particularly on Twitter. The hashtag #fckafd had been trending on the social media network and at times, appeared in the top five spots.

Preliminary results credited the AfD with around 13 percent of the vote, making it the third biggest political force in Germany – a stunning result for a party that was founded just four years ago.

The AfD began life in 2013 as an anti-euro protest party but then shifted focus to capitalize on misgivings over the record migrant influx in Germany.

Its tone turned increasingly extreme in the last stretch of campaigning, with one of its two leading candidates saying Germany should be proud of its war veterans and claiming that terror was grounded in Islam.