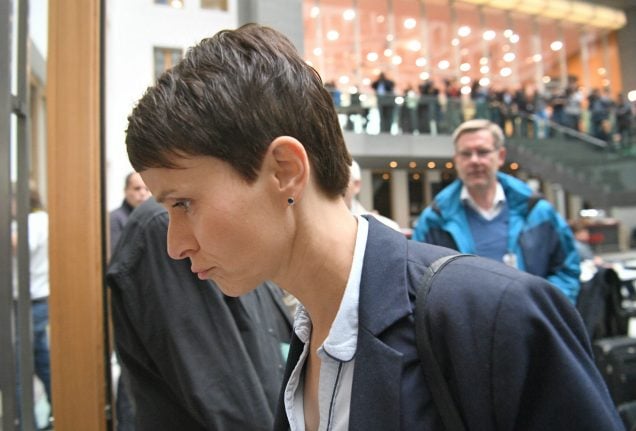 It was meant to be a show of strength by the far-right party, who had just won a shock 12.6 percent of the vote in the national election.

The party’s chairwoman Frauke Petry, was joined on stage at a press conference in Berlin by co-chairman Jörg Meuthen, plus Alexander Gauland and Alice Weidel, the two lead candidates in the election.

But then it came Petry’s turn to speak.

The party chairwoman said that the party had to confront its internal divisions. She then announced that she would not join the AfD faction in the Bundestag.

“I decided after careful reflection that I will not sit with the (AfD) parliamentary group” in the Bundestag, Petry told a press conference alongside other key figures in the party before abruptly leaving the room.

Petry won a direct mandate in Sunday's election and said she would still serve as an MP.

A flustered Meuthen could only tell reporters that “we hadn't agreed to that and I apologize to the press conference.”

On Sunday evening Petry had harshly criticized how Weidel and Gauland had run the election campaign, saying their abrasive style had put middle class voters off the party.

Petry was for a long time the telegenic face of the far-right party, but lost influence earlier this year when she tried to steer it towards a more moderate position.

During election campaigning in recent weeks Gauland and Weidel repeatedly became the centre of media due to statements and leaks which broke long-standing taboos in German society.

The 76-year-old Gauland told supporters on the campaign trail that it was time for Germany to be proud of the achievements of its soldiers in two world wars. Meanwhile Welt am Sonntag published an email reportedly written by Weidel in 2013, in which she claimed that Chancellor Angela Merkel and her government were “pigs who are nothing other than puppets of the allied powers.”

“It is their task to keep the German people down by creating civil war in urban areas by flooding them with foreigners,” the email stated.

After the surprise election result on Sunday the AfD will become the third largest party in parliament. It is the first time in over six decades that a party further to the right than Merkel's CDU will be represented at the federal level.

It now remains to be seen whether Petry has support among the over 90 new AfD parliamentarians.

Hours after her dramatic announcement, four AfD local MPs said they were leaving party ranks and forming their own group in the state parliament of Mecklenburg-Pomerania.

Weidel, meanwhile, has called on Petry to lay down her post as party chairwoman and then to leave the party altogether. She also revealed that Petry had not spoken to either her nor Gauland “for months” even though the duo were the leading faces of the AfD's campaign.