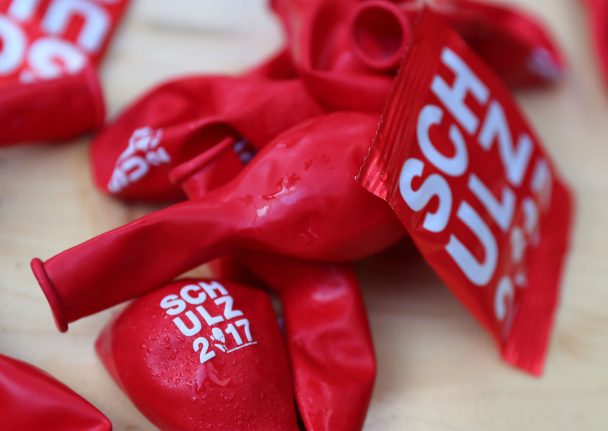 The SPD, Germany's traditional working class party, won just 20-21 percent in its fourth loss in a row against Merkel's conservative bloc, which scored 32-33 percent, according to exit polls.

The SPD immediately announced it would head into opposition rather than serve another humiliating term as junior partner to Merkel, after what Schulz called “a difficult and bitter day”.

Running against “Mutti” (Mummy) Merkel, seen by many Germans as a beacon of stability in turbulent times, has long been considered a political suicide mission, and few envied Schulz for trying.

The SPD campaign pledge to fight for more social justice did not sufficiently resonate in a country where unemployment is at a post-reunification low, even if the wealth gap is widening.

For the past four years, the SPD served as junior partner to the popular Merkel — a thankless task in which it failed to earn much credit despite policy successes from a minimum wage to gay marriage.

“After the latest defeat against Merkel, Social Democrats now need to seriously rethink their approach,” said Michael Broening of the Friedrich Ebert Foundation, a think tank close to the SPD.

“In particular, they will have to face the bitter fact that many workers have turned their back on the former workers' party.”

The campaign was not helped when former SPD chancellor Gerhard Schröder controversially took a post on the board of Russian energy giant Rosneft.

It was Schröder who pushed through the stinging Agenda 2010 labour and social reforms, which are credited with reviving a moribund economy but also damaged the SPD “core brand” and led many disenchanted members to turn their backs on what some have since called the “traitor party”.

Many defected to the far-left Die Linke party, further splintering the left spectrum which also includes the ecologist Greens party.

The SPD's stinging defeat comes at a time when Europe's leftist parties are out of office in France, Britain, Spain and many eastern European and Nordic countries.

Analysts point to structural reasons that work against the left — the closure of factories, coal mines and shipyards, and a general decline in traditional party loyalties.

The working class base of the about 150-year-old SPD is now split between those with secure jobs, and a “precariate” of temporary and contract workers — and automation and digitisation mean many more jobs may soon be performed by robots and algorithms.

The new cleavage, he recently wrote, is between the “cosmopolitans” who favour open borders for goods and services, capital, migrants and refugees, and those who want to close them.

The SPD “must acknowledge that the groups who used to vote for them no longer exist,” said Gero Neugebauer of Berlin's Free University.

Some look to the way old-school Socialists like US Democrat Bernie Sanders and Britain's Jeremy Corbyn have energised young voters.

But the German SPD “decided 20 years ago to move to the centre,” said Neugebauer. “And it won't be able to go back, given its policies and personnel and the fact the Linke now exists.”

Three quarters of German voters, and almost as many SPD members, had said before the vote they would prefer a defeated SPD to go into opposition, according to a Civey institute poll.

Broening agreed that this may help it win back voter trust but cautioned that this “in itself is unlikely to be a miracle cure”.

“In France, in the Netherlands, in Spain and elsewhere centre-left parties have recently been ousted from power only to suffer further marginalisation in the opposition,” he said.

“And for some of these centre-left parties the move away from government has become a road of no return.”