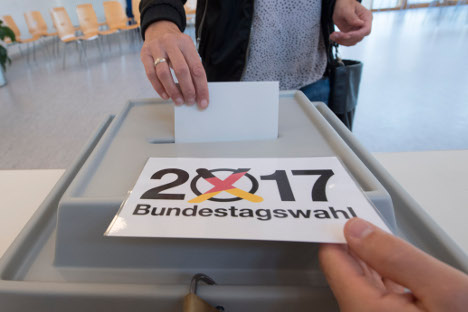 Here are some facts and figures about the country:

The Federal Republic of Germany is bordered to the north by Denmark, to the west by France, Belgium, the Netherlands and Luxembourg, to the south by Switzerland and Austria and to the east by the Czech Republic and Poland.

The country covers 357,050 square kilometres (137,850 square miles). The landscape rises from lowlands on the North and Baltic seas to the Bavarian Alps in the south. The biggest rivers are the Rhine, Elbe and Danube.

Berlin, with 3.5 million inhabitants, is Germany's biggest city and the second biggest in the European Union after London.

The EU's most populous country, Germany had 82.8 million inhabitants at the end of 2016, including 10 million foreigners. Germany has the highest population of ethnic Turks outside Turkey, at about three million.

It is one of Europe's most densely populated countries, at 232 people per square kilometre. With a low birth rate, the population is ageing and shrinking.

Christianity is the main religion in Germany, with a third of the country Protestants and a similar number Catholics. Other major religious groups in Germany include Muslims, who are estimated at 4.4 million and a Jewish population of 99,000.

Otto von Bismarck, the “Iron Chancellor”, founded the German Empire in 1871 from many independent states, dominated by the Kingdom of Prussia. After four years of bitter fighting, Germany suffered a devastating defeat in World War I and the humiliating conditions of the peace settlement contributed to the rise to power of Adolf Hitler and the Nazis in 1933.

Hitler unleashed the Holocaust and plunged Europe and the world into its bloodiest-ever conflict that resulted in the death of tens of millions of people and the division of Germany and Berlin into four zones, shared by the victorious powers – Britain, France, the Soviet Union and the United States.

Divided Germany became the key Cold War battleground between nuclear superpowers Russia and the United States, whose tanks faced each other across the Berlin Wall, which was finally and jubilantly torn down by people power in 1989. Germany was reunified in 1990.

The head of government or chancellor is now Angela Merkel, the leader of the centre-right Christian Democratic Union.

She has governed since 2005 and was re-elected in September 2009, ruling with Bavarian sister party the Christian Social Union and, in her second term, with junior partners the pro-business Free Democrats. She now leads a coalition with the Social Democratic Party as junior partners.

There is also a president, a largely symbolic head of state, currently Frank-Walter Steinmeier, a former foreign minister who was sworn in in March 2017.

Germany is a founding member of the European Economic and Monetary Union, launched in 1999, and was among the first 11 countries to physically use the euro currency on January 1st, 2002.

The German armed forces had 178,304 personnel in June 2017. The constitution states they can be used only “for defensive purposes”. The army requires parliamentary consent for any missions abroad. Conscription was ended in 2011.