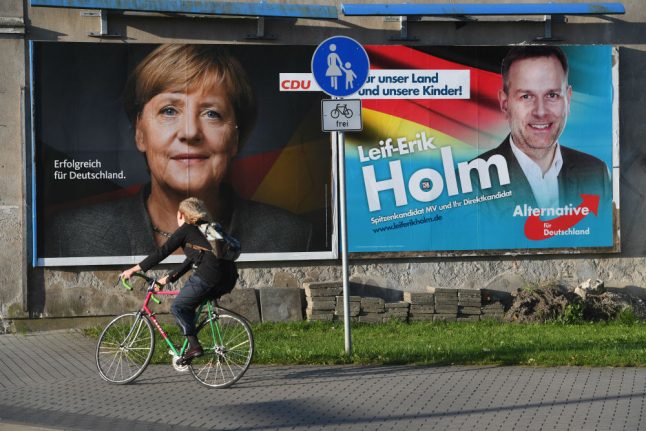 The 63-year-old Merkel, who polls say will cruise by a double-digit margin to a fourth term on Sunday, will rally supporters in the southern city of Munich, at the height of the Oktoberfest beer festival.

Schulz, 61, a former European Parliament president and leader of the centre-left Social Democrats (SPD), will take to the stage in a central Berlin square in a last-ditch attempt to turn the race in his favour.

Despite Merkel's commanding lead, the latest polls point to storm clouds on the horizon.

The anti-immigration, anti-Muslim party Alternative for Germany (AfD) looks set to easily clear the five-percent hurdle to representation in parliament in a historic post-war first.

The prospect of some 60 MPs from a nativist outfit branded “real Nazis” by Foreign Minister Sigmar Gabriel taking seats in the Bundestag lower house has added urgency and angst to what had long been dismissed as a suspense-free campaign.

“Go vote and vote for the parties that are 100 percent loyal to our constitution,” Merkel told Germans in a swipe at the AfD.

“We have to take a clear stance when it's about our basic values.”

The AfD is currently polling at around 11 percent, deeply unsettling the mainstream parties that have governed Germany since the war.

A strong showing for the AfD could eat away at Merkel's lead. With her CDU and its Bavarian sister party CSU at 36 percent according to a new poll late Thursday, close to their worst-ever score (35.1 percent in 1998).

Schulz this week took some succour from Merkel's slipping poll numbers, hoping for a “last-minute turnaround” linked to “growing unease” in the population.

However, his SPD is set to fare even worse, around 22 percent, signalling an unmitigated disaster for Germany's oldest party.

With the economy humming, business confidence robust and unemployment at post-reunification lows, analysts say there is simply little appetite for change at the top.

During her campaign rallies, Merkel has been repeatedly confronted by organised AfD protesters, even dodging a few tomatoes while hammering home her stability-and-prosperity stump speech.

The rightwing populists have seized on those disillusioned by Merkel's 12-year tenure, and by her 2015 decision to let more than one million mainly Muslim asylum seekers into the country.

Even the mainstream media point to a degree of Merkel fatigue, arguing that the soporific campaign and a sense of complacency could ultimately drive many German voters into the arms of extremists.

“For months, Merkel was the phlegmatic queen of the campaign but now, near the finishing line, it's not Martin Schulz that is posing a danger but her own ponderousness,” Rene Pfister of Der Spiegel wrote.

“That antagonizes AfD supporters, who in the CDU's confidence of victory see further evidence of the arrogance of power in the late Merkel years.”

Merkel's chief of staff Peter Altmaier caused a stir this week by suggesting it would be better for Germans not to vote at all than to cast their ballot for the AfD.

One of their two main candidates, Alice Weidel, slammed the comments as anti-democratic.

“Altmaier's declaration is tantamount to admitting political bankruptcy and reveals his disturbed relationship to democracy,” she fumed.

AfD supporter Guenther Poppe, a 69-year-old pensioner attending a campaign event in the eastern Berlin district of Marzahn late Thursday, said he refused to be stigmatized for his vote.

“The right in Germany has a negative connotation but the AfD could serve as constructive opposition for the good of the German people,” he told AFP.

But Gerd Appenzeller of Berlin's daily Tagesspiegel warned that news of the AfD's success would hit like a bombshell Sunday night.

“Although the AfD is highly unlikely to fare as well as the extreme right in France or the Netherlands, any relative success for the AfD will reflect badly to international onlookers, given German history,” he said.

“No amount of rage against Merkel, fury at the SPD, or resignation at modern politics can justify voting for a party that would – given the chance – shake this country's foundations to the core.”