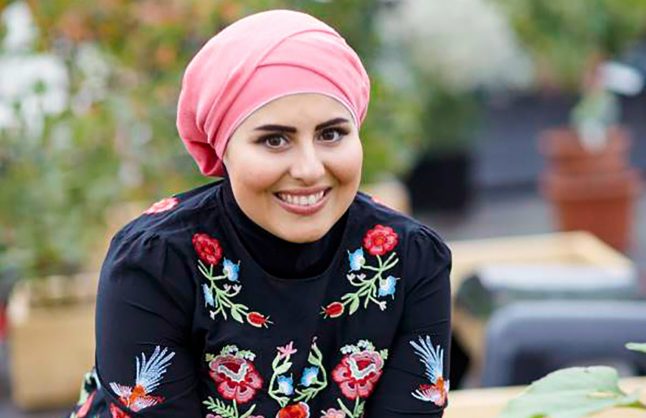 Flash forward two years and Jazmati has become a dynamo in the kitchen in her adopted hometown of Berlin, with Chancellor Angela Merkel among those dazzled by her Middle Eastern delights.

“In Syria, we spend a lot of time for the tables to be beautiful and attract people with good food,” she told AFP.

“I started out with birthday dinners and Christmas parties and now I can cook for 800 people!”

Jazmati, a Damascus native, arrived in the German capital in October 2015 and has become something of a star among the 600,000 Syrians who fled the civil war for Europe's top economy.

With doe eyes and a round face peeking out from under a headscarf, Jazmati's placid appearance belies a red-hot drive to succeed.

Now running a thriving catering business — Levante Gourmet — with her husband, Jazmati, 30, is the kind of model of good integration Merkel can point to in defending her liberal border policy ahead of Sunday's election.

“I have a good life in Germany,” smiles Jazmati, who has also penned a glossy German-language cookbook.

Pouring a generous lug of olive oil into a sizzling pan, Jazmati is relieved she's no longer reliant on the modest state benefits granted to asylum seekers.

Forty percent of newcomers are registered as unemployed, and the German Institute for Economic Research estimates it will take up to 10 years to fully integrate them into the economy.

Many struggle with the language and a lack of marketable skills. The story of how Jazmati perfected her cooking skills to wind up cooking for the chancellor at an event last spring is, in itself, a voyage of discovery.

Jazmati got her start in the culinary arts during a three-year sojourn in Jordan, the first stop on her odyssey as a refugee.

She took a job hosting a television cooking show in which she would whip up dishes alongside Arab stars.

And when she found herself struggling to remember her favourite recipes from home, she rang her mother for help.

Shown on a channel critical of the Syrian regime, her programme quickly became a hit.

While she was slaving over a hot stove, her husband set off for Europe on a rickety boat, following a perilous route taken by tens of thousands of Syrians.

When he arrived in Germany in 2015, he was officially recognised as a refugee and granted permission to send for his wife.

Since then, the window for Syrians has gradually closed. While 98 percent of those who arrived in Germany in 2015 won refugee status, now only about 30 percent are accorded full protection.

Jazmati perfected her skills in the shared kitchen of a refugee shelter in the German capital.

“I have the soul of the kitchen, the soul of food. But I discovered these things in Berlin more than in Jordan,” she said.

After a successful catering gig for a function attended by the world's most powerful woman, she posted a picture online of the chancellor smiling in front of the cleared buffet table.

“Even Merkel likes it,” read the caption.

Among her specialities are mouthwatering shawarma sandwiches of spit-roast meat, and kibbeh, small minced meat dumplings lightly spiced with cinnamon and cardamom. And her molokhia herb soup came straight from the kitchen of her childhood.

“You will never test anything like shawarma from our kitchen,” she boasts with a smile.

“We cook in a different way.”

Jazmati is grateful to her adopted homeland but admits to a certain culture shock.

“Germany is a very technical country and I was afraid because I am so emotional,” she said.

But she said food has served as a bridge between people. And with a grasp of German that is still shaky, she says it is also a way of communicating.

“I want Syrian cuisine to become as well known as French or Italian,” she said.

Jazmati's compatriots in exile are also grateful to have a taste of home.

“All Syrian people miss the food because it is made with love,” she said, a tradition she is trying to keep alive thousands of miles from home.

Asked whether she could imagine returning to the ruins of her homeland, Jazmati squeezes her eyes closed.

“We don't know. The night will end and the morning will start. But when? I don't know,” she said.

“Maybe not my son will see this morning, maybe my grandson…”