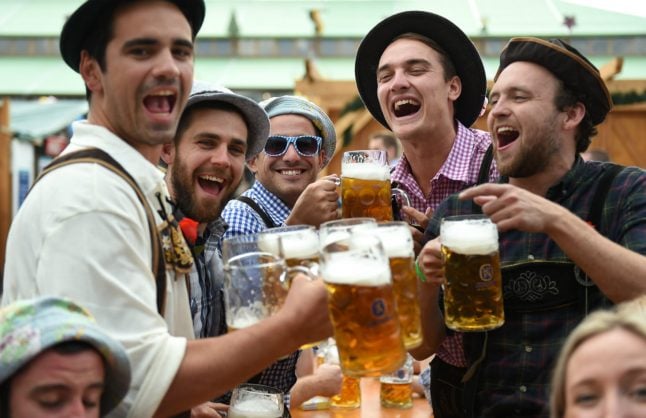 Perhaps surprisingly, the vast majority – 71 per cent – of visitors to Munich’s Oktoberfest come from Bavaria, including 58 percent from the Munich area alone (according to a 2014 survey). Around 14 per cent come from abroad, with Americans, Italians and Swiss flocking to Munich in the largest numbers.

Though visitor numbers have been between five and 7.7 million since 1980, the Oktoberfest wasn’t always so fashionable, remembers Andi Kohl, who was born and brought up in Munich.

Kohl, 46, who owns a nanotech firm, visits the “Wiesn” (the local name for the Oktoberfest) every year – though when he was young, it didn’t have the positive reputation it enjoys today.

“In my memory”, he says, it was “associated more with ‘lager louts’ and drunkenness and fighting”.

Kohl sees a very different Wiesn today, one that is “more modern”, with “better music” and “much more international”. Back in the 1980s, he recalls, Tracht (the traditional Lederhosen trousers and Dirndl dresses) was seen as “uncool”.

It could hardly be different nowadays, with locals and even foreigners streaming into the festival in traditional and modern takes on the Bavarian attire. Kohl’s business partner, Wayne Daniell, 47, hails from Aylesbury, Buckinghamshire in the UK, and this year he’s celebrating his 20th Wiesn.

“I love the Tracht,” he says. “It’s what keeps the modern event rooted in tradition. It reminds people of the history and the culture here in Bavaria.” And has the festival changed in the past two decades? It seems to have changed a “fair bit”, Daniell says, with “more people, more stalls, more rides, more hype”.

There was a dip in visitor numbers in 2016, likely due to terrorist-related security concerns. This year (despite what the far-right AfD says), visitor numbers are again good, with most people largely unworried about safety issues.

Kohl says that he “doesn’t think about security”, though he has “friends who’ve stopped coming out of fear”.

Despite extra security, such as baggage checks, the overwhelming response from visitors seems to be: “It’s a pain, it’s necessary, now let’s enjoy ourselves.”

“Enjoying himself” is certainly a reason Matthew Johnson flew in to the festival from the US. He saved up for more than six months to be able to afford the trip to the “world’s biggest beer fest”.

In a cavernous tent, a huge crowd roars him on as he downs a litre of beer in one go. The roars of approval are deafening, and he’s determined to return next year.

Grace Tan and Katherine Yam Yam from the Philippines are on their first visit, and they’ve brought their parents to celebrate their father’s 60th-birthday – he’s kitted out in fabulous-looking Lederhosen. Similarly enthused is Israeli Gregory Dubinsky, here on a stag trip. For Dubinsky, a special forces trainer from Tel Aviv, it’s his first visit and it’s beyond his expectations.

“We’d heard it’s crazy,” he says, “but the size of the tents, the fantastic clothes… and I didn’t think there’d be all those traditional songs. Everyone’s drinking, but they’re also happy and calm.”

Though the overwhelming feeling is positive, there are some local reservations about the modern Wiesn. Clad in Lederhosen, Munich-born Fabian Michnick, 25, works in a craft brewery in Giesing, and gently suggests the Oktoberfest is nowadays too touristy and it shouldn’t get any bigger.

“Some friends no longer come because it’s just too big,” says his drinking partner, Patrick Hofreiter, 26, a carpenter from the city.

Many locals, such as Katherine Beckel, 41, a film production coordinator from Munich, agree.

“The Wiesn,” says Beckel, dressed in beautiful, traditional Dirndl, is a “profit machine”.

Every year, there are public discussions by festival authorities and partners about the prices, plus increasingly about ethical and sustainability issues, such as the availability of organic food, for example.

Beckel sounds a familiar refrain that “everything is nowadays too expensive” and “with such very high prices it would be at least nice to know where your roast chicken comes from.”