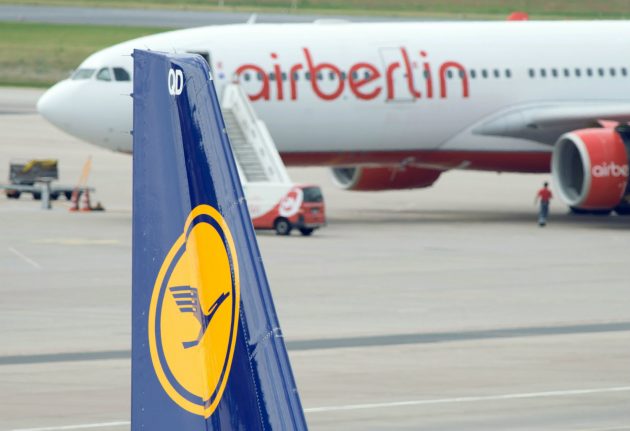 Top priority was “stabilising” the status of some 38 aircraft Lufthansa already “wet-leases” – including their crews – from the smaller firm, Lufthansa chief Carsten Spohr told journalists in Frankfurt on Wednesday evening.

“Wet-leasing” refers to airlines leasing aircraft from each other rather than a leasing company.

On top of that, “we want to grow by 20 to 40 more planes” for low-cost subsidiary Eurowings, either by “organic” growth or through acquisitions from Air Berlin, he said.

The airline believes that would be the maximum number competition authorities are prepared to accept.

“We expect Air Berlin to exit the market” rather than be revived whole as hoped for by some interested investors, Spohr added.

Germany's second largest carrier, Air Berlin declared bankruptcy in August after major shareholder Etihad Airways cut off a cash lifeline, and has been kept flying by an emergency loan from the German government.

After bidding closed last week, Air Berlin creditors are set to meet Thursday to discuss the offers, while the board will make its final decision on the company's future on September 25.

Spohr dismissed arguments from competitors, including pugnacious Ryanair chief executive Michael O'Leary, that allowing Lufthansa to gobble up parts of its competitor would create an all-conquering “monster” in the German market.

Even if Lufthansa were to buy all of Air Berlin, “that's still less than what one airline has in Ireland. So much for the idea of a 'monster',” he said in a swipe at the Ryanair boss.

“We're confident that our plan will get regulatory approval” from competition authorities in Brussels and Berlin, he added.

Looking to the future of the European airline industry, “one of the most fragmented sectors you can imagine”, Spohr expects Lufthansa to play “an active role” in an expected wave of consolidation.

“Air Berlin will not be the last step,” he said.