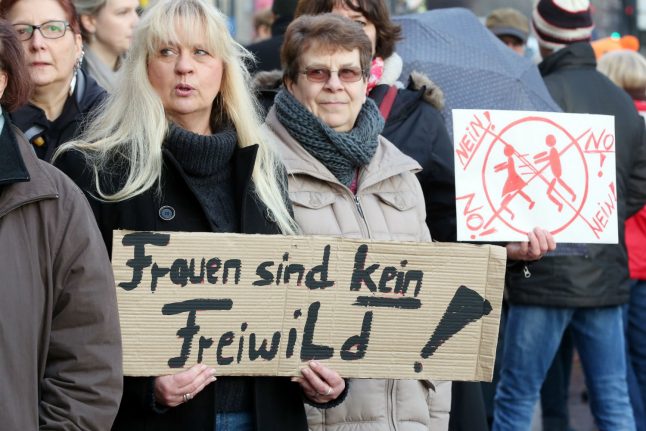 A woman holding a sign that says "Women are not fair game." Photo: DPA

Last Wednesday the Bavarian interior ministry released statistics that made for sobering reading.

In the first half of 2017 some 685 sex crimes were recorded in Bavaria, a rise of 48 percent on the same period in 2016. Of these crimes, 126 had suspects who had arrived in Germany as asylum seekers.

The figures showed that sex crimes with asylum seekers as suspects jumped by 91 percent in a year. While the large majority (71 percent) of suspects were Germans, people who had come to the country seeking asylum made up 11 percent of all suspects, a figure disproportionate to their number in the population.

The statistics are for crimes against sexual self determination, which includes rape and sexual assault as well as exhibitionism, forced prostitution and the illegal distribution of pornographic material.

Writing in the Süddeutsche Zeitung on Wednesday, journalist Ulrike Heidenreich said that women who welcomed refugees into Germany in 2015 now have a very different attitude.

“When women meet large groups of male refugees today there is always a sense of being threatened,” she writes.

“They fear that the way they dress is sending the wrong signal. That is unacceptable. The freedom to dress and move how you want is non-negotiable.”

Heidenreich mentions several cases of sexual assault from the previous week in Bavaria, in each of which asylum seekers were suspects.

On Sunday two Afghan men were arrested over the rape of a teenager on her way back from school in Munich. In northern Bavaria three asylum seekers were arrested for sexually harassing a girl at a parish fair. In Rosenheim a jogger was reportedly raped by an asylum seeker. While six of seven men recently deported from Bavaria to Afghanistan had criminal records for sexual assault.

Blaming a crude understanding of the position of women in society among many young male refugees for the rash of assaults, Heidenreich writes that “the rights of women are just as important as those of refugees.”

But in the same newspaper Matthias Drobinski argues that the criminal statistics shouldn’t be taken at face value.

Pointing out that new laws were introduced after mass sexual assaults in Cologne at the beginning of 2016, which created a wider definition of a sex crime, Drobinski argues that more crimes were reported because more forms of harassment had become crimes.

He also criticizes the Bavarian interior ministry for initially reporting a 50 percent rise in rape, even though crimes against sexual self-determination is a much broader category.

Furthermore, he points out that the statistics from Bavaria don't necessarily reflect a nationwide phenomenon. North Rhine-Westphalia is the only other German state to have published similar figures. In the large west German state sexual assaults fell in the first half of 2017 in relation to the last six months of 2016.

“On the whole women are less likely to be the victim of sexual assault now than 20 years ago. The idea that women can’t walk alone on the streets anymore is objectively false,” Christian Walburg, a criminologist at the University of Münster told the SZ.

Over a million refugees have arrived in Germany since 2015, with two thirds of asylum seekers being male. At the same time one in four asylum seekers is between the ages of 18 and 30.

Experts argue that the demographic make up of Germany's asylum seeker population makes them particularly at risk of committing crime.