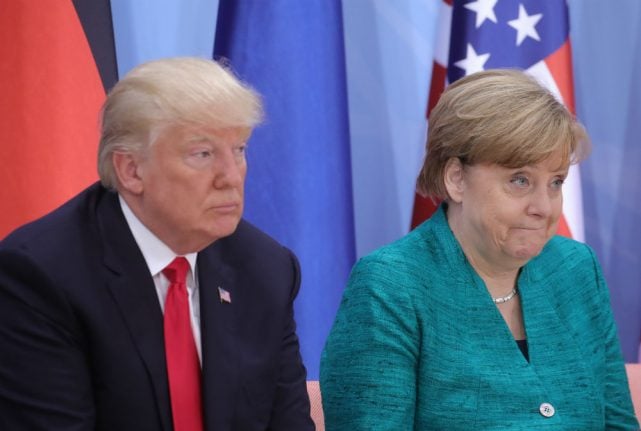 But if the 63-year-old chancellor sails her way – as widely predicted – to a fourth term in Sunday's legislative elections, the leaders of the United States and Germany will have to figure out a way to work together in the long term.

Pretty much everything about “Mutti,” as Europe's most influential leader is known at home, sets her apart from the 71-year-old occupant of the White House, from their background to their personality and political style.

Merkel is as cautious, low-key and pragmatic as the US president is impulsive, blustery and unpredictable.

Since the start of the year, the pastor's daughter from East Germany has left the world in little doubt as to her deep differences with the American president – the third she has worked with after George W. Bush and Barack Obama.

When addressing a joint press conference in Washington with the former real estate mogul, elected on a pledge to put “America First,” Merkel instead advocated an “open-minded” approach to globalization.

In Sicily last summer, after a bruising G7 meeting which saw Trump break with America's global partners on the Paris climate deal, she did not mince her words in saying the “unsatisfactory” talks had been “six against one.”

Days later in Munich, the chancellor warned that the trans-Atlantic bond had been weakened by Trump's election and that the Old Continent could no longer blindly rely on its historic ally.

“We Europeans truly have to take our fate into our own hands,” she declared.

“Trump and Merkel are oil and water,” summed up Charles Kupchan, professor of international affairs at Georgetown University and a former advisor to Obama.

“Trump made it to the Oval Office by challenging the establishment and promising to discontented Americans that it was time for change. Merkel is the opposite.”

“She keeps winning because she promises Germans business as usual.”

The differences between the two run deep.

Complaining about Germany's trade surplus is nothing new coming from Washington, but Trump has been far more aggressive than his predecessors, threatening retaliation in the form of border taxes.

Berlin is furious about the US president's decision to pull out of the Paris climate accord.

And if he follows through on threats to tear up the 2015 nuclear deal struck between six world powers and Iran, the relationship will sour even further.

Back in 2003, under the Social-Democrat government of Gerhard Schroeder, German opposition to the US-led war in Iraq badly strained ties with the Bush administration.

But never in recent history, says Kupchan, have tensions between Washington and Berlin run so high.

“Trump is raising questions about the US commitment to free trade, to combating climate change, to upholding the order that Europeans and Americans have built since World War II,” he said.

At stake is far more than just bilateral relations: as the veteran among Europe's current leaders, Merkel holds a unique role on the world diplomatic stage.

Speaking to the base

The Trump-Merkel relationship has also been defined in part by the need – on both sides – to cater to their electoral base.

When Trump was campaigning last year on a tough anti-immigration platform, he would hold up the chancellor as a counter-example, openly deriding her decision to open Germany's borders to hundreds of thousands of asylum seekers.

“Hillary Clinton is running to be America's Angela Merkel, and we've seen how much crime and how many problems that's caused the German people,” he told a rally in North Carolina.

Merkel has also had to fend off any suggestion from her rival Martin Schulz that she lacks backbone towards the US leader.

“She has in the last few months been provoked by the election campaign into a somewhat stronger rhetorical position than she would prefer,” said Jeremy Shapiro, research director at the European Council on Foreign Relations.

With the German election out of the way, ties between the leaders could yet improve. But few observers are holding out hope for a fresh start.

So what can the ever-pragmatic Merkel realistically hope to achieve in her dealings with the 45th US president?

“Stand up for yourself, but do it quietly. Don't engage in public fights with him, and try to get along to the extent that you can without showing weakness,” Shapiro said.