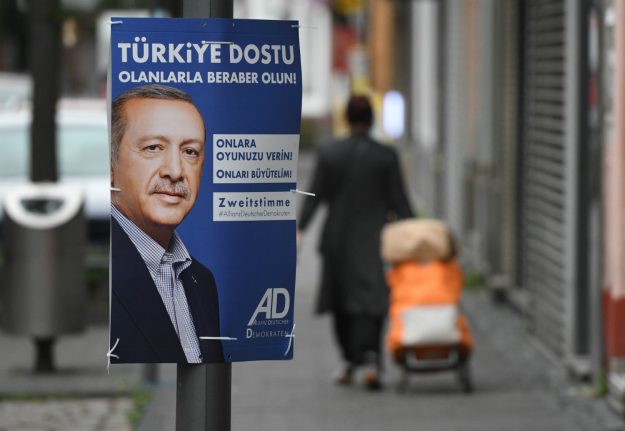 A campaign poster for the Alliance of Democratic Germans in Cologne. Photo: DPA

As German voters become accustomed to seeing lamp posts plastered with election posters, one in western Germany stands out in particular.

The Turkish leader unofficially entered the election race when he called in August for German Turks to sabotage Angela Merkel’s Christian Democrats (CDU), her main rivals the Social Democrats (SPD), and the Green Party at the national election on September 24th.

Ankara’s intervention came during a year of downward-spiralling tensions between the two former allies and led to a furious response from Berlin. Foreign Minister Sigmar Gabriel has described it as “an unprecedented act of interference in the sovereignty of our country.”

Now the ADD, created after the German parliament voted last year to recognize the murder of 1.5 million Armenians in 1915 by Ottoman Turks as genocide, is using Erdogan's image to try and win over disgruntled Turkish voters.

Kerem*, a small business owner in Düsseldorf, the capital of North Rhine-Westphalia, believes Erdogan has every right to interfere.

“I think he’s right,” he tells The Local. “Germany said Turkish people should vote against Erdogan in the referendum, now it’s the other way round. Erdogan just wanted to show that there was a double standard, that they shouldn’t meddle.”

In April Turkey voted in a referendum on whether to extend the powers of the Turkish president, with the “yes” campaign winning a narrow victory. Germany did not explicitly takes sides, but Merkel urged for freedom of speech ahead of the vote in Ankara when she told Erdogan “opposition is part of democracy.”

Kerem moved to North Rhine Westphalia – the German state with the largest Turkish population – ten years ago. But, like roughly half of the three million people with Turkish roots living in Germany, he doesn’t have dual citizenship and therefore can’t vote in German elections.

The 40-year-old is a fan of Erdogan but denies that he would be influenced by him.

“He doesn’t need to tell me anything,” he says. “Every year when we go home we see with our own eyes that the media and television [in Germany] lies. He has made Turkey a much better country.”

Still though, if he could vote he would back Merkel. She is “more honest” than the SPD’s Sigmar Gabriel, he says, describing the foreign secretary as a liar for warning Germans against travelling to Turkey after an activist was arrested there in July. Turkish supporters of Erdogan at a rally in Cologne in 2014. Photo: DPA

If German Turkish voters were to heed Erdogan’s call and boycott the major parties, the SPD would likely take the biggest hit.

In the last election in 2013 the centre-left party gained an estimated 64% of the Turkish vote, compared to 12% for the Greens. In the same Data4U study published last year, only 6.1% of Turkish voters felt they had a political connection with Merkel’s CDU.

Professor Achim Görres, who is conducting the first ever study on German immigrant voting for this year’s election, doesn’t believe Erdogan’s call will resonate with the majority of the voting Turkish population.

“My speculation is that it will have very little impact,” he says. “Erdogan is more interested in mobilizing support at home. He’s appealing more to Turks in Turkey than Turks in Germany.”

The academic from Duisburg-Essen University believes the SPD could lose out on the Turkish vote in other ways, though.

“German Turks of a working-class background were traditionally very much in favour of the SPD,” he explains.

“This group of Germans of Turkish descent is getting more and more heterogeneous, especially among the younger voters whose educational level is dramatically on the increase.”

“Things are changing, and the bias in favour of the party is declining as well.”

The results of the April referendum show that Turks in Germany back Erdogan more strongly than their fellow voters in Turkey (63 percent voted for the constitutional reforms, compared to 51 percent in Turkey).

In Essen, a Rhineland city with a large Turkish community, three quarters of the Turkish diaspora voted for Erdogan's reforms.

Caner Aver, a researcher at the Centre for Turkish Integration (ZftI) in Essen, believes the background of Turkish guest workers who first moved to the region in the 1960s played a role in the outcome – contrasting them to the comparatively liberal Turkish community in Berlin.

“The Ruhr valley had a very high influx of people from conservative circles who predominantly came from mining regions in Turkey to mining jobs in Germany,” he says.

“They are more business-minded, more conservative. Things are starting to change now, but unemployment and social segregation led to them distancing themselves from the rest of society.” Nonetheless, the majority of those who voted in the Turkish referendum don’t have the right to vote in Germany, making it difficult to estimate whether the 800,000 people with Turkish roots who only have German citizenship are as loyal to Ankara.

What seems clear is that the ADD – the party with Erdogan’s face plastered over their posters – will make any inroads into the German political landscape this September.

The fledgling party are only running in North Rhine Westphalia, where they stood for state parliament for the first time in May and won a miniscule 0.15% of the vote. They are so unpopular that there is no accurate polling available for them.

Aver believes Erdogan may be using the ADD to discover what influence he exerts among the Turkish diaspora.

“The number of votes the ADD get will be a sign of how influential he is in the Turkish community here. I think Erdogan wants to test how popular he is within Germany, even among those with citizenship.”

Among those who have emigrated from Turkey to Germany since the 1960s are also fierce opponents of the Turkish strongman. Erdogan has re-ignited conflict with the country’s Kurdish minority in recent years, and is far from popular among the many Kurdish Turks living in Germany.

Hidir Cagritekin, a Kurdish Turk who moved to Essen in 1974, says that “anyone who listens to him should pack their bags and go back to Turkey.

“It’s impossible what he’s doing, he should be banned from politics,” he says angrily, addressing Erodgan's boycott call.

“We are an uneducated people,” adds the 50-year-old, who would not betray his vote. “People would be able to see if they went back to Turkey that there is no freedom of speech, this is a place where they throw journalists in a cell for no good reason.”

The extent to which Cagritekin's point of view is reflected among other Turkish Germans will become clear after the election. But it is unlikely that Erodgan's boycott call will have an important impact on results.