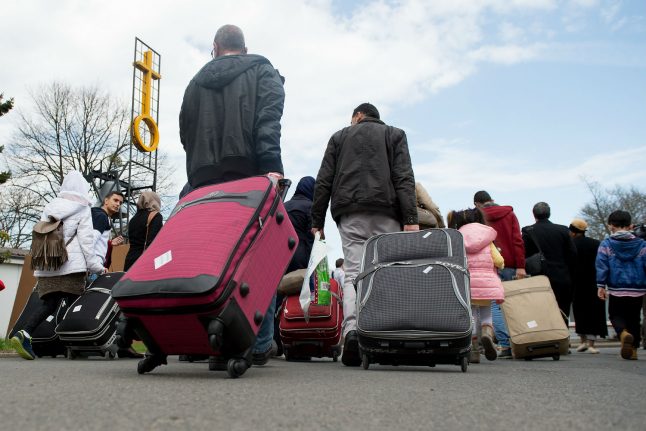 Refugees arriving at an asylum centre in 2016. Photo: DPA

Figures released by the federal government and published by the Süddeutsche Zeitung (SZ) on Monday show that the backlog of asylum appeals waiting to go through the courts has risen dramatically over the course of 2017.

By the end of July, 283,000 appeals against asylum decision were pending, almost double the number than for the end of 2016.

Meanwhile the court system is working through the appeals at a much slower pace – only 39,000 decisions were made between January and May.

The avalanche in appeals comes as the second stage in the long bureaucratic process refugees have to go through in Germany. The Federal Office for Migration and Refugees (BAMF) decided on 480,000 cases from the start of the year, as it finally started to make headway on the piles of cases it had to deal with after the refugee influx of 2015.
Of the close to half a million decisions made by the BAMF this year, 190,000 were rejections.
But the courts often overrule the BAMF decisions. Syrians have a particularly good chance of success – four out of every five court appeals end in their favour.

Syrians are often given subsidiary protection, a form of asylum which currently prevents them from bringing their families to Germany. BAMF has been granting Syrians subsidiary protection since early 2016, shorty after the government curtailed the rights given to people with this status.

Critics suspect that the BAMF decision to give Syrians this subsidiary protection came under pressure from the government to make asylum in Germany less attractive.

Roughly 69,000 of the pending appeals this year were for refugees attempting to upgrade their status from subsidiary protection to full asylum.

“The government's deterrence policies are leading to pressure piling up on immigration authorities and the courts, while refugees aren’t given the security and protection they so desperately need to integrate,” Die Linke (the Left Party) politician Ulla Jelpke told the SZ on Monday.

In July Robert Seegmüller, the chair of the federation of administrative judges, warned that the court system was “stretched to its limits” in dealing with asylum appeals.