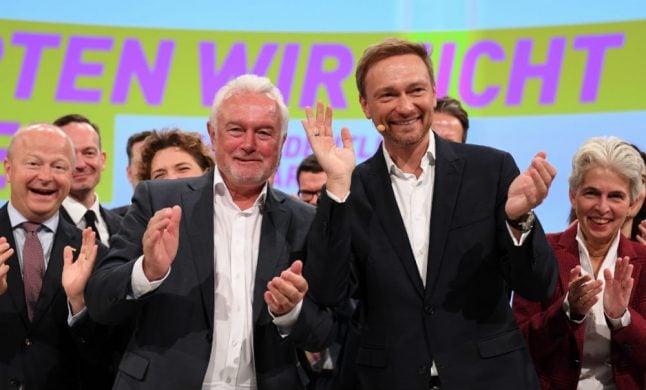 Were the FDP to reprise its historic role as junior coalition partner to Chancellor Angela Merkel's centre-right CDU/CSU, it would bring its staunch opposition to more financial transfers between European Union member countries.

That may ensure that mounting momentum behind reform of the bloc breaks on resistance from Berlin.

Stakes are high in an election race where the winner seems certain and all eyes are on four smaller parties, each polling around 10 percent.

READ ALSO: How the real race in election 2017 is a viciously tight battle for third

With Merkel's party far ahead in the polls, but unlikely to gain an absolute majority, the chancellor will need to partner with one or more of the smaller parties – unless she wants to continue a loveless 'grand coalition' with the centre-left Social Democrats (SPD).

She has ruled out working with the anti-immigration Alternative for Germany (AfD), or with the far-left Die Linke, which leaves the FDP and Greens battling for a potential junior role.

FDP secretary-general Nicola Beer says the goal is clear: “The decisive question for this election will be which party is the third largest.”

Cautious Merkel has left her options open, signalling to both the pro-business FDP and the left-leaning Greens that there could be a place for them at the cabinet table after the September 24th vote.

If the FDP joined a CDU government, eurozone reform would be “dead in the water,” economist Christian Odendahl of the Centre for European Reform said, labelling it “the most dangerous coalition for the euro.”

More than any other party, the FDP worships at the traditional German altar of economic “Ordnungspolitik” – setting clear market-based rules and then applying them strictly no matter the cost.

At the European level, that translates into a rejection of any plans for a common eurozone budget to cushion the impact of economic crises, or a European Monetary Fund to make emergency loans.

Such ideas have been ping-ponging between French and German leaders since the election of President Emmanuel Macron in May ignited a surge of confidence in the EU's future among the continent's elite.

The party would refuse to join a governing coalition that didn't include a tough line on Europe, he added.

Free Democrats are sharply critical of the bailouts that have kept Greece in the euro despite its mountain of debt.

Their manifesto calls for a “state bankruptcy procedure for the eurozone” that could lead to nations leaving the single currency.

Leading lights of the FDP recognize that among other departures from the party's DNA, the first chapters of the Greek bailout epic were written while it was Merkel's junior partner between 2009 and 2013.

“It was no longer clear what we Free Democrats stood for” under the last coalition, said Beer.

To Russia with love

Germany's ties with its immediate neighbours might not be its only change of stance under a “black-yellow” coalition, the term for a CDU-FDP pairing in the nation's colour-coded politics.

Calls for rapprochement with Russia have been heard across the political spectrum during the campaign.

The run-up to the vote has seen massive criticism of former Social Democratic chancellor Gerhard Schroeder for accepting a job on the board of energy firm Rosneft.

But the Berlin-Moscow connection might thaw if – as is common for a junior coalition partner – Free Democrats leader Lindner were to become foreign minister.

Controversially, he has suggested that the EU “temporarily” accept Russia's annexation of the Crimea from Ukraine and dismantle economic sanctions.

Most mainstream politicians, including Merkel, insist that Moscow must fulfil the terms of the Minsk accords hammered out between France, Germany, Russia and Ukraine before sanctions are lifted.

For now, such clashes loom far off in the future for Lindner and his team.

They are betting on black-and-white posters of the photogenic leader, a domestic policy programme stuffed with familiar pro-business measures and tough talk on migration and refugees to boost them past other third-place contenders.

“How would you build a country if you were starting from scratch?” Lindner asks in one of the FDP's punchy video spots.

In Germany's European and foreign policy, the question may be closer to being answered than allies would like come next week.