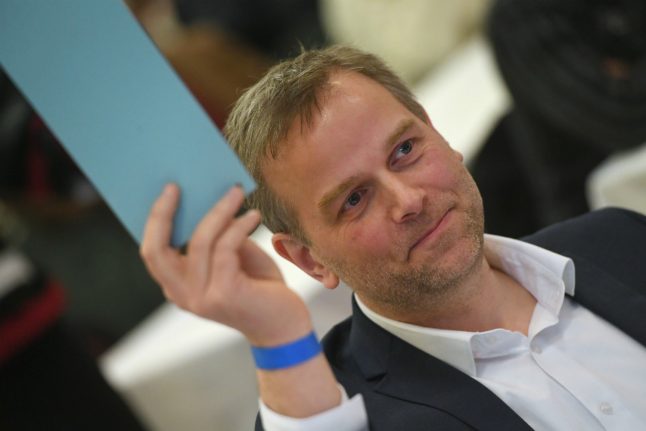 Holm is challenging Merkel in the district on the Baltic Sea that she has represented since she was a fresh-faced political newcomer in 1990 when Germany reunited. He insists she is not invincible despite her massive lead in the polls.

His upstart Alternative for Germany party pipped Merkel's own CDU with 21 percent of the vote to take second place behind the Social Democrats in Mecklenburg-Western Pomerania state last September, putting him in the regional legislature.

Brimming with confidence, Holm, 47, now says he's ready to snatch her direct mandate, and accuses her of breaking a bond with voters.

“Mrs Merkel single-handedly opened the borders – we can't ever forget that,” he told AFP in the coastal town of Greifswald.

“She allowed one million unregistered and unchecked people into the country and that is absolutely unacceptable.”

Around 890,000 mainly Muslim asylum seekers arrived in 2015 alone in what Holm calls a mistake that changed the course of German, and European, history.

Although its support has slipped since its peak at the height of the refugee crisis, the AfD is now represented in 13 of Germany's 16 state houses and looks poised to win its first seats in the Bundestag lower house.

Holm, who would not look out of place at a start-up company board meeting, represents the ostensibly more moderate wing of the fractious nativist party.

He studiously avoids the kind of fire-breathing rhetoric on Muslims and Germany's wartime guilt that has made the party a pariah among mainstream politicians.

“If you have a very critical stance on uncontrolled mass immigration you get stigmatised as a far-right extremist. We have nothing against foreigners as such,” he said.

“We just need to bring the right ones into the country, the ones we can use,” he said, calling Canada and Australia's immigration laws good models.

Asked if he saw Donald Trump's rise as a model, Holm criticised the US president's Twitter-based “sabre-rattling” and “contradictory policies”.

He said the AfD was instead looking to homegrown strategies to shield the country from foreign influence and put Germans first.

“We want to remain a sovereign country, not a United States of Europe,” he said, blaming a drive for greater European integration pushed by Merkel for tipping the balance for Brexit and alienating many eastern European countries.

Holm said he, like Merkel, had a “sheltered” childhood in communist East Germany but was “electrified” by the fall of the Berlin Wall in 1989.

He worked for 20 years in radio before outrage over multi-billion-euro aid packages for stricken euro partners such as Greece pushed him toward politics.

The district he aims to win, which Merkel clinched again in 2013 with 56 percent of the vote, has very few foreign-born residents or refugees, who are distributed based on the size of local populations.

But Holm, who has warned on the campaign trail of the looming threat of sharia law, said the small migrant population masked a troubling trend of greater Muslim influence.

“My approach to politics is: look ahead. We musn't wait until it's too late,” he said, painting a grim picture of “parallel societies” in cities such as Berlin and Hamburg.

“You see headscarves, fistfights among migrants, theft. There are things on the horizon that we've never seen before.”

Noting that the AfD has made its deepest inroads in east Germany, Holm said many voters there felt the country had again become a “stifling” place ruled by “political correctness”.

“Many don't even dare go to our demonstrations because they're afraid their picture will wind up in the press and their employers or colleagues will see it,” he said.

“We easterners fought for freedom and don't plan to give it up.”

Although Holm said AfD supporters feel intimidated on the country's market squares, it has been the chancellor herself who has faced booing and chants of “Merkel must go!” by demonstrators carrying AfD signs at several of her campaign rallies.

While Merkel is virtually assured to win a Bundestag seat and is widely expected to be re-elected to a fourth term, Holm hopes to hand her a humiliating setback by turning in a strong result.

He expressed grudging respect for her “staying power” as an eastern woman standing up to men from the west. “But now I wish her a pleasant retirement.”