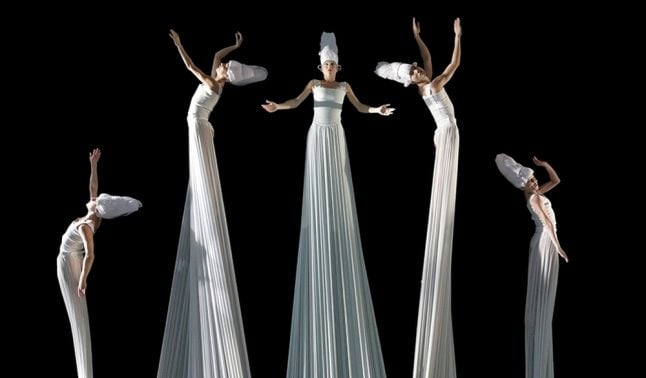 In the heart of Düsseldorf’s Altstadt, construction teams have been hard at work over the past few weeks erecting a massive white marquee.

Where the formidable castle of the Count of Berg once stood, the Burgplatz will play host for the next two weeks to the Düsseldorf Festival (September 13th – October 2nd) and a cast of performers from around the world. Now in its 27th year, the festival draws acts from as far afield as Burundi, Korea, Canada and Australia.

While many festivals take a thematic approach to their line-up, the Düsseldorf Festival’s artistic and managing directors, Christiane Oxenfort and Andreas Dahmen, seek out artists whose performances cross genres – drawing together music, dance and theatre in unique and unusual ways.

Expect to see arias and aerial acrobats, fashion and beat boxing, plus musicians creating their magic in churches, concert halls and even in the dark.

With 42 performances in 11 different venues around the city, there’s a good chance you won’t have time to see everything the festival has to offer. But here are five must-sees to whet your appetite.

The 2017 festival opened on Wednesday with flair, drama and spectacle, featuring an Italian dance company that definitely lives up to their name. No Gravity has built its reputation on sending its performers soaring across the stage in elaborate costumes to create a visual tableau that defies logic and the laws of physics.

This year German audiences will get their first taste of the company’s piece, Aria, which brings the Baroque era to life in a riotous blend of classical music, dance, poetry and song.

Imagine Monteverdi, Vivaldi and Pergolesi arias combined with oversized human bumble bees, boats that sail across the heavens and bodies that run, climb and glide in a 360 degree orbit, and you begin to get an idea of what you can expect from both this company and the festival to come. In stark contrast to the opening event, the firmly grounded African-European Jitta Collective examines contemporary issues of cultural appropriation, environment and identity. The Collective takes the term ‘mash-up’ to new levels combining beat boxing and spoken word, fashion and modern dance and drums and Voguing to create a narrative that reflects the German, Kenyan, Ugandan, Belgian, Senegalese heritage and inspiration of its members.

For this group of artists the message is in the music, dance and also in the clothes they wear; recycling, repurposing and reimagining as they blur the lines between art, fashion and concert. Back for a second year, Australian comedian, David Naylor, AKA Guru Dudu takes to the streets of Düsseldorf with his silent disco walking tours.

Throughout the festival you can expect to see flash mobs of disco dancing people singing and dancing their hearts out on street corners around the city. If you love the hits of the 1970s, ‘80s and ‘90s then you won’t want to miss the chance to let your hair down and cut loose.

If you fancy something a little more relaxed, Guru Dudu is also bringing his own laughter-based style of yoga to Düsseldorf. Expect to do some deep breathing and lots and lots of laughing. In her European premiere, Korean choreographer, Eun-Me Ahn, will be presenting a powerful piece that explores what it is to be different in contemporary society. With a company that includes sighted and visually-impaired dancers this piece navigates the range of experiences of those who live on the fringes of society – from cruelty through to survival and, most importantly, joy. This piece is the first in a choreographic trilogy exploring disability and difference. Montreal’s Les 7 doigts de la main returns to the festival this year with another performance that reflects the diversity and virtuosity of its cast.

Originally founded by seven circus artists, the company has a reputation for projects that delve into the human condition and unfold stories that are as complex as the choreography through which they are told. Using theatre, circus, dance, music, and acrobatics, Reversible digs deep into the family histories of the performers as they tell the stories of their own grandparents and great-grandparents and reflect on how the experiences of the past define the future.