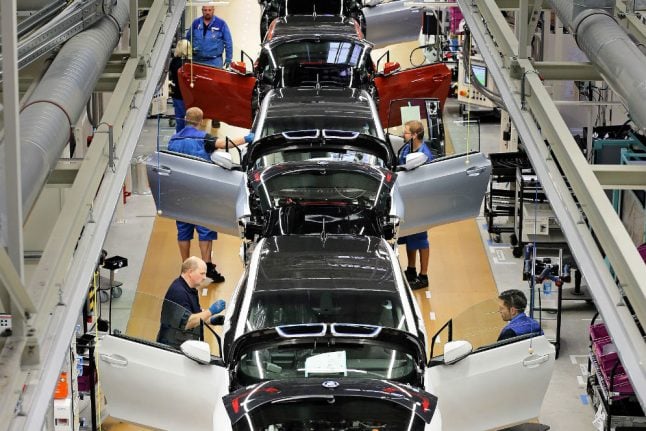 The production of e-cars at a BMW plant in Leipzig. Photo: DPA.

Car companies like Volkswagen, BMW and Daimler are all planning to produce dozens of new e-car models in the near future, reported Süddeutsche Zeitung (SZ) on Sunday. At VW and Daimler alone, a quarter of the sales volume is expected to consist of electric cars by 2025.

German automakers are also already leading the way when it comes to key car battery technology, as the number of authorized patents shows.

Not only do electric batteries provide the essential source of power in the motors of e-cars, with the death of the internal combustion engine arguably on the horizon, the success of the e-car revolution is highly dependent on more efficient, more compact batteries.

For car companies committed to an electric future, the race to get patents for key car batteries has already begun.

Daimler, Volkswagen, BMW and Porsche combined have registered 348 patents for lithium-ion batteries over the past six years, according to patent attorneys at Munich law firm Grünecker, putting them ahead of French manufacturers Renault and Peugeot as well as American manufacturers General Motors, Ford and Tesla.

And they're probably capable of achieving it, a worldwide evaluation of patent applications for battery technologies now shows.

Producing our own batteries would mean more employment in Germany and less dependence on Asian producers we work with today such as Samsung and chemical company LG Chemical, said head of Germany's largest metalworkers' union Jörg Hofmann, as reported in SZ.

But producing their own, highly specialized and costly battery cells rather than buying them may only pay off on a huge scale. Not everyone is convinced in the development of German cell battery technology.

“We certainly wouldn’t do such nonsense,” said Matthias Müller, chief executive officer of VW not long ago, referring to the high costs of cell production where the job of making cell batteries could be better left to mass producers in Asia.

BMW chief development officer Klaus Fröhlich was also skeptical, saying that while the company has “the competence to develop cells that meet our requirements and areas of application,” it makes more sense for us to have the battery cells produced by a supplier according to our specifications.

Meanwhile VW is considering building its own battery production facility at its plant in Salzgitter, Lower Saxony.

While it might be worthwhile if all German automakers worked together on producing the cells, this could be compared to all of them working together to build the same engines – an impossibility, according to SZ.