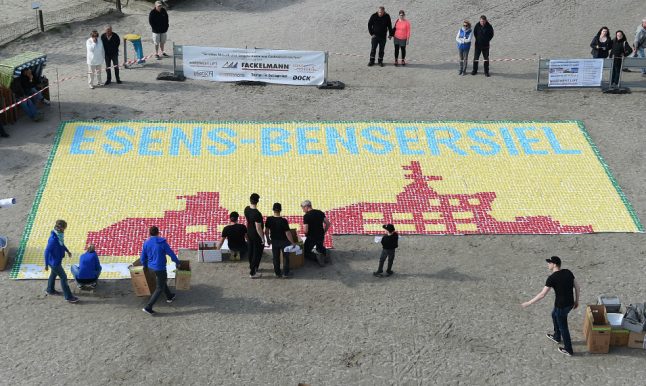 A view of the mosaic from above. Photo: DPA.

Intending it to be the largest mosaic of its kind, volunteers who had helped out are now hoping for an entry in the Guinness Book of World Records, according to event organizer and head of tourism marketing in Esens-Bensersiel, Benjamin Buserath.

When viewed from above, the mosaic clearly spells out “Esens-Besnsersiel” in the colour blue against a yellow background.

As volunteers helped line the mini paper umbrellas in the sand, donations were also collected in the East Frisian seaside town for the children’s hospice in nearby city of Cuxhaven, reported the local tourist office.

By Sunday evening, around 23,000 umbrellas had been placed on the beach, according to the resort area's website. The initial plan was to attempt to lay down 30,000 umbrellas but the volunteers later in the day decided against it.

“The team was a little behind schedule because it was so windy,” said Buserath.

They had started working at around 11am but by around 3pm, only about half of the umbrellas had been set down, he explained.

According to Buserath, the previous record was 20,000 cocktail umbrellas.