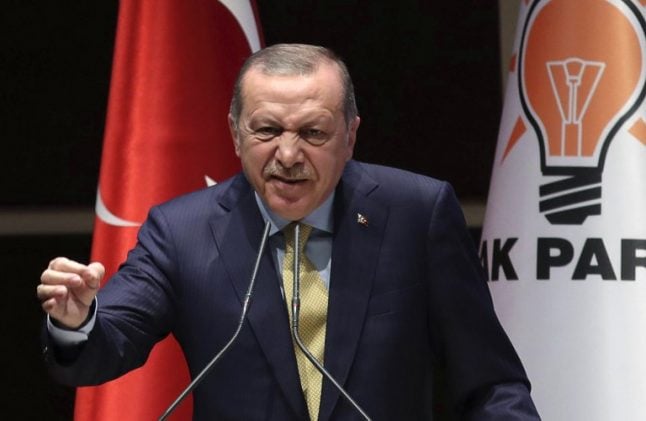 Turkish President Recep Tayyip Erdogan delivering a speech in Ankara on Wednesday. PHOTO: ADEM ALTAN / AFP
Ties have plummeted since last year's attempted overthrow of President Recep Tayyip Erdogan and Germany's strong criticism of an ensuing crackdown which saw more than 50,000 people arrested.
Relations further deteriorated after the detention of several German citizens including Deniz Yucel, a correspondent for the Die Welt newspaper.
The Turkish foreign ministry urged citizens living in Germany or planning to travel there “to be cautious, taking into account the situation in Germany where they could risk xenophobic or racist treatment”.
It asked them to “stay away from political debates, political party gatherings ahead of the general election” on September 24.
Ankara claimed there was “discrimination” against Turks “on the basis of their political views”, which has led to “verbal attacks against some of our citizens”.
Erdogan last month urged Turks in Germany not to vote for Chancellor Angela Merkel's Christian Democratic Union (CDU), the Social Democratic Party (SPD) or the Greens, as they were “enemies of Turkey”, enraging German politicians.
Merkel on Sunday provoked a wave of anger in Turkey and claims of German “populism” after she said she would seek to end talks on Ankara's accession to the European Union.