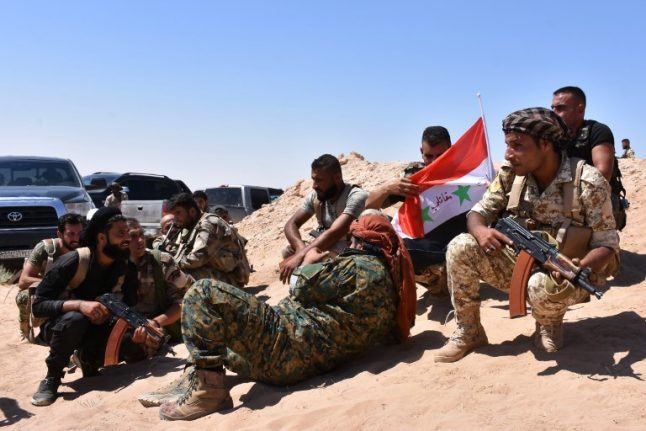 Syrian pro-government forces hold a position near the village of al-Maleha on Saturday during the ongoing battle against Isis jihadists. Photo: AFP
Investigators have assembled a list of serial numbers of the blank passports and the authorities that issued them, the newspaper reported, citing confidential documents from federal police and the interior ministry.
The stolen passports are genuine identity papers that have not yet been filled out with an individual's details, making them a valuable tool for forgers.
In total, German security services are aware of some 18,002 blank Syrian passports stolen from Syrian government sites, including thousands held by groups other than Isis.
“Developments in connection with the refugee situation have shown that terrorist organisations are using the opportunity to infiltrate potential attackers or supporters into Europe and Germany undetected,” a spokeswoman for the BKA federal criminal police told Bild am Sonntag.
Members of the group behind a series of coordinated bomb and gun attacks in Paris that claimed 130 lives in November 2015 were found to have used fake Syrian passports.
However, “'Fake or altered passports are mostly used for illegal entry without further motives like carrying out a terrorist attack,” the spokeswoman said.
Some 8,625 passports checked by German migration authorities in 2016 turned out to be fakes according to the documents seen by Bild am Sonntag.
But the files provided no information on how many of the passports were among those that had passed through IS' hands.