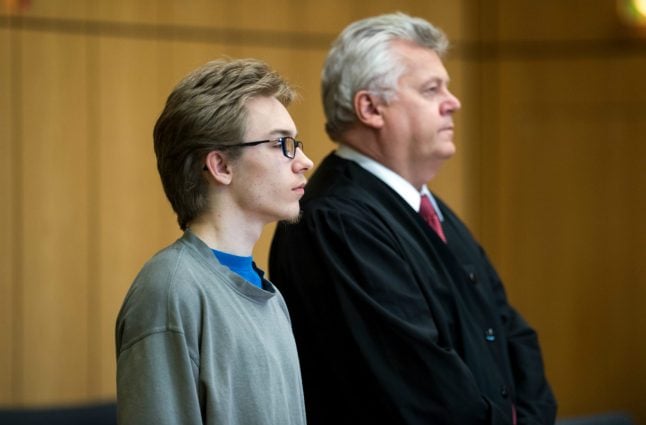 “The defendant wants to say that he does not dispute the charge,” defendant Marcel H.’s lawyer said at the beginning of proceedings at the Bochum state court.

But defence gave no further details about the alleged murders, nor did they respond to the prosecution's description of Marcel H.'s life before the murders.

The 19-year-old is accused of murdering his 8-year-old neighbour Jaden on March 6th in the town of Herne in North Rhine-Westphalia, before stabbing a 22-year-old school friend called Christopher to death two days later. He allegedly also posted a picture of the murder of Jaden online shortly after he committed the crime.

Prosecutors argue that the teenager convinced Jaden to come into his house on the pretext of helping him hold a ladder. But when inside he stabbed the boy 52 times. Prosecutors say he acted out of blood lust, Spiegel reports.

News initially broke of the murder when disturbing photographs appeared online, including a selfie appearing to depict the bloody suspect with the boy's body, and an audio message purporting to be the suspect describing the act in a “cold-blooded” manner, as police described at the time.

An internet user alerted police to the pictures, who found Jaden’s body in the basement.

According to prosecutors, Marcel H. then convinced a former school friend that he needed a place to stay, as his parents were out of town. But on the next day, the 22-year-old friend found out that police were searching for Marcel H. and threatened to inform them of his whereabouts.

The defendant allegedly responded by stabbing him 68 times and leaving him to bleed to death. Two days later he set the apartment on fire in an attempt to destroy the evidence.

Marcel H. eventually handed himself in to police, calling them from a restaurant to say that he was the person they were looking for. He had already admitted to the crimes while in police custody.

The trial is scheduled to last until the middle of October.