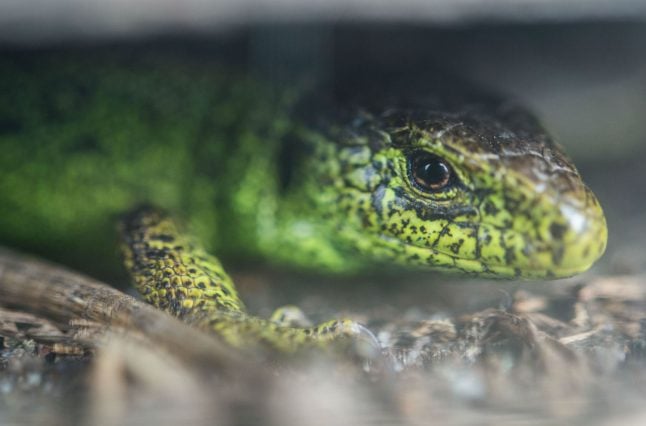 A Mauereidesche in Baden-Württemberg. Photo: DPA
In recent months wildlife specialists have been picking their way through the long grass where a high-speed rail line between Stuttgart and Ulm in southern Germany is set to be built. Armed with mini lassos on the end of poles, their targets are Zauneidechsen and Mauereidechsen, two species of endangered lizards.
EU law dictates that all of the lizards whose habitats will be disrupted or destroyed by the building work have to be given new homes, meaning that an estimated 6,000 of the reptiles have been, or will have to be, re-homed.
The stretch of land is only given over for rail construction when “we have done everything in our powers to collect all the animals,” Sandra Panienka, who is leading the lizard-collecting operation, told DPA in May.

The Stuttgart-Ulm high speed line is part of the ambitious S21 project, which centres around a new underground central station in Stuttgart.

The project is currently predicted to cost almost €6.5 billion, well exceeding the initial budget of €4.5 billion, with the completion date set for 2021 at the very earliest.

Over the past five years, construction has been delayed in several sites throughout the huge scale project, as builders have had to turn their attention to creating barriers to protect lizards from building work. A Zauneidechse is released into its new home. Photo: DPA

On the Stuttgart-Ulm line the lizard population has contributed to a delay of 18 months in construction, according to Deutsche Bahn. Meanwhile the conservation task which got underway in 2012 has cost €15 million – roughly €2,000 per lizard.

Those large costs aren't just for capturing the lizards – they also cover planning, observation, re-location and the creation of new habitats.

Various relocation sites have been designated in areas surrounding Stuttgart. They contain stones on which the reptiles can sunbathe, insect-friendly vegetation and sand for the lizards to lay their eggs in.

However, the choice of the Killesberg park, an area of fields, trees and hills in the north of the city, as one of the most recent relocation sites for the Mauereidechsen, has caused a great deal of controversy.

Locals claim nature has been destroyed for the sake of animal conservation, expressing anger and disbelief at the introduction of 15,000 tonnes of limestone to the previously untouched meadow this summer.

The stones are piled into two metre-high walls which Killesberg residents are describing as unnecessary.

Questions have also been raised regarding the organization and effectiveness of the conservation efforts.

Conservation of the species wouldn't have cost so much if it had been addressed earlier in the project, says Johannes Enssle, State President for the Nature And Biodiversity Conservation Union (NABU), in Baden-Württemberg.

“It's unfortunate, of course, that this is so expensive,” Enssle said.

“And you have to wonder, what were the planning committee thinking?”

“What would be disproportionate, would be to eradicate two entire species,” he said.