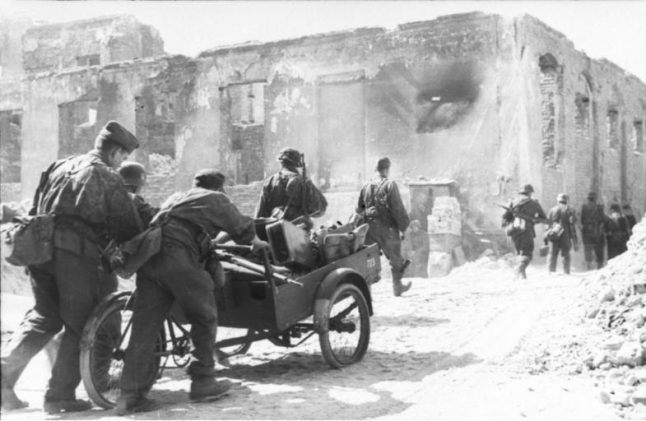 “Poland made a binding decision in August 1953… to relinquish demands for further war reparations,” government spokesman Steffen Seibert said, adding that in the view of Berlin, “this issue was therefore settled both legally and politically”.

Seibert said that Germany had fully recognised its responsibility in World War II, while emphasising that it had also paid “considerable reparations for overall war damages” to Poland.

But Poland's current rightwing government disputes the validity of the post-war deal, saying it was made under the diktat of the Soviet Union.

Polish Prime Minister Beata Szydlo said Thursday that she believed her country had the right to demand further reparations from Germany.

“The position of the Polish government on war reparations will be officially expressed when a political decision is taken,” she said in a radio interview.

“We are ready to go ahead with this procedure.”

Poland suffered the brunt of the two-front attack by Nazi Germany and the Soviet Union during World War II.

Six million Polish citizens, including about three million of Jewish origin, were killed under the Nazi occupation of 1939-45, and Warsaw was virtually razed.

“The manner in which unresolved issues are dealt with in the relations between the two countries is of utmost importance,” according to a statement signed by five of Poland's most senior clerics.

“They need to be conducted on a level of wise diplomacy to maintain hard-won trust, not to be undermined by arousing negative social emotions on either side,” said the church leaders including Cardinal Kazimierz Nycz and Archbishop Henryk Muszynski.

The clerics pointed to a watershed 1965 letter by Polish and German Catholic bishops which urged reconciliation efforts to overcome the deep wounds left by the war.

“Reconciliation is a word that has defined Polish-German relations for over a quarter-century,” they said, adding that “we can easily lose it through poor decisions, and hasty words.”

According to a survey by Poland's independent Ibris pollsters published last month, 51 percent of Poles oppose any reparation claims against Germany, while 24 percent believe such claims ought to be made.

The talk of reparations comes as the PiS government is under fire both at home and abroad over a slew of reforms that critics say erode democratic standards and the rule of law.