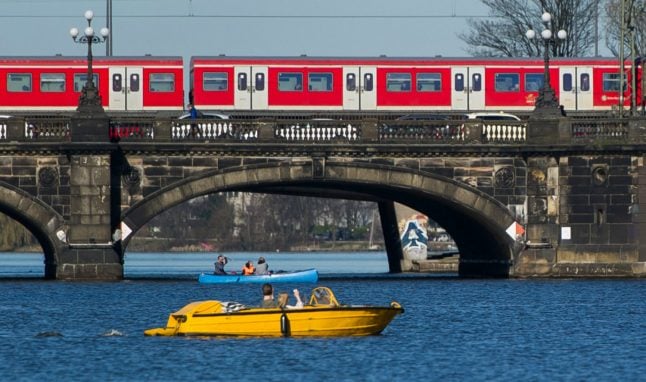 Photo: DPA
1. Every ship receives a special greeting when it comes into port Downriver from Hamburg lies the “Willkomm-Höft” or “welcome point” which welcomes and says goodbye to every ship coming in and out of Hamburg harbour. Each ship is welcomed with the national anthem of the country it is registered to and bid farewell on its return journey by dipping the Hamburg flag and hoisting the international flag signal for “bon voyage”. The captains at the point, known as “greetings-captains”, have over 150 national anthems to welcome ships from all over the world.

2. It has the most bridges of any city in the world When it comes to cities with lots of bridges, places like Venice and Amsterdam spring to mind, but surprisingly, Hamburg takes the top spot. The city has well over 2,500 bridges, which is more than Amsterdam and Venice combined. These bridges range from road and railway bridges to bridges across the Elbe and the city’s many canals. In 1907 Carl Hagenbeck Jr. took a big step for animal welfare by founding Tierpark Hagenbeck. This zoo much more closely resembled the architecture of zoos we visit nowadays, where animals are kept in large open enclosures separated from the public by moats. At the time zoo animals were generally kept in small cages to allow visitors to get up close and personal, but this was eventually agreed to be cruel and the trend changed to favour a more natural environment for the animals.

Herbertstraße in the red light district is not a good place to be for women unless you're of a certain profession. A popular stag night destination and hub for prostitution, women have been known to be chased away by prostitutes if they dare to venture into this notorious part of town. Not surprising given that Hamburg has one of the largest red light districts in the world, surpassing even Amsterdam.

5. The Beatles actually began their music career in Hamburg Contrary to popular belief, the Beatles got their start in Hamburg and not Liverpool. The iconic band played an estimated 273 shows in the city from 1960-1962 where they honed their skills and developed their distinctive sound which helped them achieve their iconic status. John Lennon reportedly even said “I might have been born in Liverpool – but I grew up in Hamburg”.

6. Hamburg has the oldest Opera House in Germany

A ballet performed in the Staatsoper Hamburg in 2013. Photo: DPA.

Hamburg's first State Opera House opened in 1678 and continues to be used today, making it Germany's oldest opera house. Over the years it has hosted classical artists such as George Frederick Handel and Gotthold Ephraim Lessing and modern day artists such as Pavarotti and Plácido Domingo. Right in the heart of Planten un Blomen park sits the biggest Japanese garden in Europe. It was completed in 1990 by the Japanese landscape designer Yoshikuni Araki and features a traditional tea house sitting on the edge of a small lake filled with koi fish. The grand Town Hall building was designed to show off the wealth and prosperity of the port city and does not disappoint when it comes to rooms. The 112m tall building has a floor space of around 7800qm which contains a whopping 647 rooms. There is, however, a common misconception that the Rathaus has more rooms than Buckingham Palace. Sadly this is not the case as the British palace beats the Rathaus' total by over 100.

9. Hamburg is home to the world’s largest mini railway In 2000, twin brothers Frederik and Gerrit Braun set about making their dream of creating the largest miniature railway in the world a reality. One year later, Miniatur Wunderland opened its doors. Miniatur Wunderland has over 50,000 feet of train track, more than 1,000 trains fitted and even a miniature airport which simulates take offs and landings with model airplanes. The brothers are always expanding and consistently break their own Guinness World Records.

10. Inflatable armbands were invented in Hamburg In 1956 Bernhard Markwitz came up with the idea of inflatable arm bands after his daughter fell into a fish pond in their garden. He wanted people to enjoy water rather than see it as dangerous and so set out to create a device to help young children learn to swim. In 1964 he presented his daughter with his float design and she called the armbands angel wings, leading to their German name “Schwimmflügel”, meaning “swimming wings”.