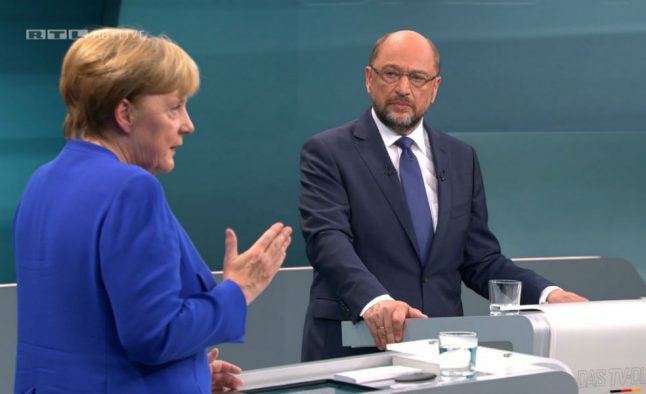 Angela Merkel and Martin Schulz in a televised debate on Sunday. Photo: DPA.

Sunday's prime-time TV clash had been billed as Schulz's last chance to sway millions to his cause and halt a devastating popularity slide.

“Merkel came out as sure, Schulz was hardly able to land a punch. The candidate is an honourable man.

With millions of voters still undecided, Schulz had been looking to the debate to erode the commanding 17-percentage point lead of Merkel's CDU party and their Bavarian CSU allies ahead of the September 24th polls. Statista have broken down an Infratest poll taken after the duel.

Schulz, who had previously complained that Merkel was lulling voters to sleep with her refusal to engage in combative debate, went on the offensive quickly on the hot-button issue of migration.

He accused Merkel of failing to coordinate plans with EU neighbours when she decided to open Germany's borders in 2015 to allow in refugees, many from war-torn Syria and Iraq.

But Merkel was not rattled, countering that: “In the life of a chancellor, there are moments when you have to make a quick decision.”

And as Schulz voiced his wish to end EU membership talks with Turkey amid escalating tensions with Ankara, Merkel stole the issue from under his feet as she said she did not “see them ever joining” the bloc.

Together with EU counterparts, she will examine if “we can end these membership talks”, Merkel added.

The plunge in bilateral relations began after Germany sharply criticized Ankara over the crackdown that followed last year's failed coup attempt there.

An ZDF survey was closer but still had Merkel ahead with 32 percent, against 29 percent who thought Schulz performed better.

Merkel “appeared to be more competent than in any previous duel. She was not brilliant, but sure. Schulz, on the other hand, was so stiff and dowdy, like Merkel was in previous duels,” wrote Prantl.

Munich's Merkur daily also noted that “in an increasingly uncertain world which is led by testosterone-filled leaders, people don't know what Schulz wants. But they know what Merkel can do.”

But Schulz's Social Democrats equally applauded the man who is known to be a fiery orator.

Manuela Schwesig, Mecklenburg-Pommerania state premier said: “Martin Schulz has shown that he can be chancellor.”

A poll published earlier Sunday by Bild am Sonntag said close to 30 percent of Germans believe that the TV debate would have a strong impact on the campaign, while 52 percent thought it would only have limited impact.

Having already fought three previous general elections, the famously cautious Merkel is no stranger to the TV format.

But this was the first time that she has prevailed, with surveys immediately after each of the previous three editions showing a popularity bounce for her opponents.