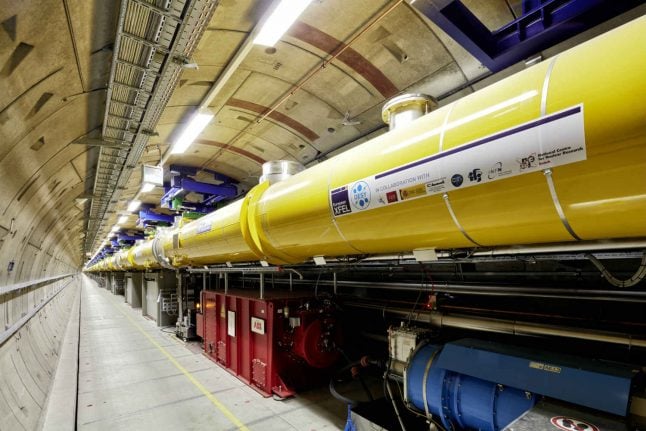 The mega-project generates extremely intense laser flashes, at a mind-boggling rate of 27,000 per second, inside a 3.4-kilometre tunnel below the northern city of Hamburg.

Hailed as one of Europe's most cutting-edge research projects, the European XFEL, hidden 38 metres below corn fields and residential areas, was opened after eight years' construction at a ribbon-cutting ceremony with science and technology ministers from the 11 countries involved.

At the heart of the 1.5-billion-euro facility is the ultrafast X-ray laser strobe light, which will allow researchers for the first time to look deep inside matter and take snapshots and “molecular movies”.

“We can look deep into the micro-world, the nano-world, the world of atoms and molecules, and study things we didn't previously know, for example what molecules do in a chemical reaction,” said Johanna Wanka, Germany's education and research minister.

Teams from around the world will be able to, for instance, map the atomic details of viruses, take 3-D images of the molecular make-up of cells or film chemical reactions as they happen.

The huge laser is “like a camera and a microscope that will make it possible to see more tiny details and processes in the nano-world than ever before,” XFEL managing director Robert Feidenhans'l told AFP.

He said that so far, scientists know many chemical and biological processes only by their outcomes — like a football fan reading the score of a match he missed.

“Now you can see the game and you can analyse it … so next time you can win,” Feidenhans'l said. “The game could be a chemical process, a biological process, it could be how you get energy from sunlight. The principle is the same: you want to see the game.”

The applications are sweeping — images of biomolecules may help understand and treat illnesses, while a peek inside a building material might explain why it tears or cracks.

The light beams can also be bundled to create extreme pressure and temperatures to study processes like those at the Earth's core.

“There will be very concrete applications, for example to develop custom-made drugs against tumours and viruses … or to test the purity of materials,” said Wanka.

“We don't yet know everything that will result from this, but it is unique and an opportunity for many researchers.”

The XFEL boasts a list of superlatives: the light's brilliance is a billion times higher than that of the best conventional X-ray sources.

The silicon mirrors along which the light is bounced, produced in Japan, are so smooth that any bump on their surface measures no more than a millionth of a millimetre.

Some 800 guests were invited for the launch of the project, which stretches from inside Hamburg to Schenefeld in the adjoining state of Schleswig-Holstein.

Germany has coughed up 58 percent of the cost and Russia 27 percent, with scientific cooperation continuing despite geopolitical tensions.

The other partners, with stakes of one to three percent each, are Denmark, France, Hungary, Italy, Poland, Slovakia, Spain, Sweden and Switzerland. Britain is in the process of joining.

XFEL — which stands for X-Ray Free-Electron Laser — is all about looking at things at the hard-to-fathom nano-level. (For a rough idea, a human hair is about 100,000 nanometres thick.)

It works by blasting a powerful laser into metal which sends bundles of electrons flying through a superconducting linear accelerator, the world's longest at 1.7 kilometres.

As they hurtle through the tube, which is supercooled to minus 271 degrees centigrade, they are charged by microwaves in order to reach nearly the speed of light.

In the next section, thousands of alternating magnets send the electrons onto a tight “slalom” course.

The electrons gather into a multitude of ultrathin discs, allowing them to emit their light in sync and produce intense X-ray flashes of laser light.

When these hit a material, they create a strobe-like series of crisp pictures with an ultrashort “shutter speed” of a billionth of a second, which can be assembled to create 3-D images or films.