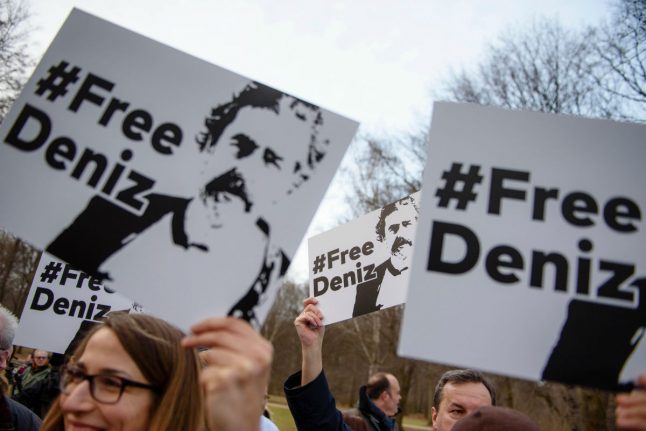 Protesters at the Turkish embassy in Berlin in February. Photo: DPA.

The consulate in the western city of Izmir was first informed of the arrests. Confirmation then came not from the Turkish government but from Antalya airport police, Adebahr said.

She declined to give further details about the case, saying only that German authorities had so far not been allowed access to the pair.

“Our demands to Turkey are very clear,” said Chancellor Angela Merkel's spokesman Steffen Seibert. “We expect Turkey to release the German nationals who were arrested on unjustifiable grounds.”

Of the 55 Germans currently detained in Turkey, 12 of them – including four with dual German-Turkish citizenship – are being held for political reasons, the foreign ministry said.

Relations between the two NATO allies have plunged after Berlin sharply criticized Ankara over the crackdown that followed last year's failed coup.

Among those arrested is Turkish-German journalist Deniz Yucel, the Istanbul correspondent of the Die Welt daily, who has now spent 200 days in Turkish custody ahead of trial on terror charges.

Turkish President Recep Tayyip Erdogan for his part has charged Germany is sheltering plotters, Kurdish militants and terrorists and demanded their extradition.

Erdogan added to the tensions this month when he urged ethnic Turks in Germany to vote in September 24th elections against Merkel's conservatives and their coalition partners the Social Democrats.

The escalating tensions have split the Turkish community in Europe's top economy, the largest diaspora abroad, which is a legacy of Germany's “guest worker” programme of the 1960s and 70s.